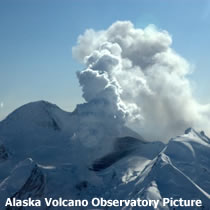 Now that Redoubt has decided that Yellow/Advisory is not to its likely and has returned to an Orange/Watch status, I’ll continue bringing new updates of the volcano has events unfold.

And nothing much has unfolded since the phreatic explosion that occurred on Sunday. The current state of the volcano, according to AVO, is minor seismic unrest and that is about it. They do offer some more details of the events on Sunday:

An AVO overflight Sunday witnessed activity from 11:30 AM until about 3:00 PM and was able to document ash emission from a new vent, just south of the 1990 lava dome and west of the prominent ice collapse feature near the north edge of the summit crater. Although ash emission was short lived, it represents the first documented ash fall during the current episode of unrest at Mount Redoubt.

They are now interpreting this explosion as “a steam explosion in the shallow hydrothermal system of the volcano.” There was new ash deposited, but as of now, they still don’t know (or believe) that it is juvenile – e.g., fresh magma. They go on to say that these are usually unexpected: “It is possible that more such explosions can occur with little or no warning [and] reach above 20,000 feet, and may contain minor amounts of fine ash. “

The big question now, as it was on Sunday, is whether this is leading to something bigger. Volcanoes such as Redoubt can have frequent phreatic explosions as the water in the hydrothermal system gets superheated by magma intruding below – but whether the appearance of this behavior means an eruption is more or less likely is not clear. As some of you have mentioned, Mt. Saint Helens had quite a few of these explosions prior to erupting in 1980. However, at this time, Redoubt doesn’t seem to be behaving like a volcano that is “ramping up” as the seismicity is still low and there hasn’t been a marked increase in gas emissions (or another explosion).

I received a comment asking about how “eruption” is defined, whether it is by the size of the explosion or something else, and really, I’m not sure if there is a consistent measure. Most of the time, a true “eruption” should involve juvenile (new) magma, in the form of lava or ash, and when the eruption is ash, this is determined by the morphology of the ash or the composition of the ash. So, if the ash in this event is just pulverized old Redoubt material, then it seems like the label “explosion” rather than “eruption” seems fitting.