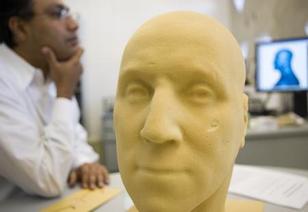 As the Arizona Republic explains, for the past 2 1/2 years, a team of researchers at Arizona State and the University of Pittsburgh have been using a mix of anthropology, 3-D scanning, and digital reconstruction to figure out what George Washington actually looked like at ages 19, 45, and 57:

“George Washington, as it turns out, was pretty hot. You wouldn’t know that by looking at a dollar bill, from which Washington stares out unsmiling and grim.

But now, images have emerged that are perhaps the most accurate yet of the nation’s first president at a younger age… He is not the Washington on the dollar bill. The younger version has a relaxed expression, creamy complexion, a lean

and muscular build and flowing auburn hair tied in a ponytail. There is

Revolutionary War, and Washington at 57 when he took the presidential

Wax museums around the world must be salivating at the opportunity to re-construct famous historical figures using this same technology: “The technology used to re-create Washington could be replicated for

other presidents and historical figures, although no project is under

way… You could do Lincoln, Jefferson, so many of our Founding Fathers.”