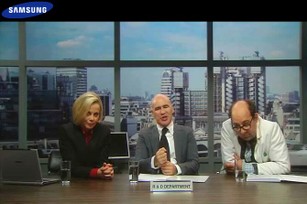 It looks like Samsung is opening up its R&D process to outsiders. (Hat tip: Chris F. Masse of the Midas Oracle) The new Pitch Your Ideas site from Samsung encourages Internet visitors to type in ideas for new products and services to a group of three actor-avatars: a Kelly Ripa look-alike; a dude in a nondescript gray business suit; and an eccentric, Dieter Zetsche-y fellow in a white lab coat.

If you’ve never seen a site like this, it’s kinda cool, since these actor-avatars actually seem to be responding to what you type in. However, it’s not nearly as cool as Burger King’s Subservient Chicken site and the actor-avatars are actually a bit more obnoxious and well, ungrateful, than I would have expected. Even some of my ideas involving nanotechnology and biotech were met with obnoxious stares, giggles or outright derision. Plus, if you linger at the keyboard too long, the Kelly Ripa doppleganger starts insulting you (“If you’re this slow with your fingers, I would hate to see your mind at work”), the bald dude in the business suit launches into a satirical song beloved by college beer drinkers everywhere, and the fellow in the white lab coat starts falling asleep at the desk. On the plus side, the characters do various accents if you encourage them, and I think the guy in the middle does a passable Robert De Niro-as-Travis Bickle: “You talkin’ to me?”).

So, what to make of all this? For one, this being Samsung and all that, I would have expected a greater emphasis on the company’s cool products — like the Samsung Blackjack — or a greater tie-in with the company’s cool advertisements (two of my faves are the Russian ad for Samsung laptops featuring Svetlana Khorkina and the Korean ad for Samsung printers featuring Jeon Ji-Hyun). Youthful, upbeat, slick and cool. In contrast, this site seemed too canned, too generic. Secondly, I think that obnoxious humor is fine for selling Burger King chicken sandwiches, but not so much for coming up with cool new R&D ideas. Rule #1 of innovation: never insult people when they come up with new ideas, no matter how impractical or ridiculous they are. (Yeah, I have you in mind, you Kelly Ripa evil twin!)

Anyway, let me know what you think.