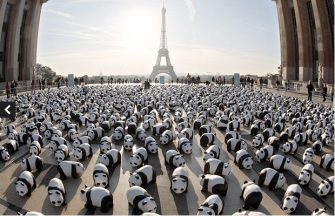 While a number of leading technology companies (IBM, Cisco, HP) have launched impressive Smart Grid initiatives, the broader public still doesn’t really understand why the “Smart Grid” is so important to our nation’s energy future. IBM has been somewhat successful in explaining the concept via its Smarter Planet initiative, but the concept is – I’m sorry – still a bit too wonkish for most people. (It’s a bit like trying to explain Quantitative Easing to investors concerned about their portfolios – they know the concept is important, but their eyes glaze over as soon as you start mentioning the finer points of monetary policy.) So what would it take for the concept Smart Grid to really take off in the public mainstream? 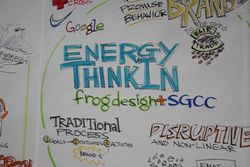 The answer might be simpler than you think. With the support of the Smart Grid Consumer Collaborative, frog design recently tackled the issue from a design thinking perspective. During an “energy think-in,” the team at frog suggested creating a symbol, logo or image to “touch hearts and appeal to the head” — it has to be “understandable to rich and poor, technical and non-technical folks,” and have global resonance. Something along the lines of the Panda for the World Wildlife Fund.

When people see the panda, they immediately recognize what the WWF is all about, and why preserving endangered species is so important. The Smart Grid doesn’t have that yet. There’s a mix of competing messages in the marketplace, and a lot of different energy solutions from a mosaic of different utilities, tech companies and consumer-facing companies. So a few months ago, frog design gathered together 50 of the smartest people on the topic and tasked them with brainstorming a symbol for the Smart Grid.

It was harder than you might think… After hours of debate, brainstorming and spirited conversation, the participants came up with five different “Pandas” – including a character called Pluggy the Energy Vampire: “Sunlight (solar power) melts him. Wooden stakes (composting) do him in, as does water (hydro power).” Other candidates included a “boiling kettle,” an adapted “peace symbol,” and all sorts of graphical arrows pointing up, down, and around.

In four more weeks, we’ll have yet another chance to discover a possible “panda” for the Smart Grid. On February 16-17 in New York City, The Economist is gathering hundreds of the smartest thinkers out there for a special Ideas Economy event on the future of the smart grid. On Day 2 of the event, David Merkoski of frog design will be leading a workshop titled “Finding Your Panda,” which will focus on the unique ability of symbols to change human behavior and create a deep emotional attachment.

So… What’s your Panda for the Smart Grid?

image: Pandas in Paris via The Telegraph

We don’t need one Elon Musk. We need 8 billion empathic futurists.
▸
8 min
—
with
Ari Wallach
Up Next
Culture & Religion