Telica, in Nicaragua, looks to have awoken after a few years of relative quiet for the active Central American volcano. The ~1000 meter Telica erupted over the last few days, producing small ash plumes (see below and top left) that reached up to ~1000 meters above the crater (video), along with a number of explosions that were heard across the region. Combine this with increased seismicity and a steam-and-ash plume noticed earlier in the week, and we could be seeing Telica entering its first eruptive period since 2008. This renewed activity prompted the evacuation of over 500 workers from a geothermal plant that are near the volcano, while the ash from the current explosions has fallen on some of the villages near Telica (which is located over 120 km from the capitol city of Managua). INETER, the Nicaraguan volcano monitoring agency, was reported as saying this activity at Telica is nothing out of the ordinary, but additional monitoring equipment will be moved to the volcano soon. Evacuations of the nearby villages have not been ordered, but at least 12 people who live especially close to Telica were moved. 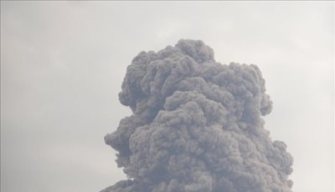 Most of the eruptions over the last 400 years at Telica have been relatively small – VEI 1 to 2 – and you have to go back to 1549 for a known VEI 4 eruption. Telica tends to produce small explosive events with the rare presence of a lava lake or the production of lahars from precipitation mixing with tephra. This might be the first recorded explosive activity at Telica since 2008, but magma appears to never be far from the surface as incandescence was noted in 2009-2010 from the main crater of the volcano.

{Hat tip to Eruptions reader Kirby and Pablitow for information in this post.}

Geothermal Technology Minus the Earthquakes

Companies hoping to harness geothermal energy were creating small but potent earthquakes while drilling through surface rock until a Connecticut company found a solution.