Etna has sprung back to life as April opens, with new eruptions from the Southeast Crater Cone. Friday and Saturday (April 8-9), the Italian volcano produced some ash and a 3-km lava flow, but then quieted. However, the seismicity under the volcano continued and late tonight into today (April 10), Etna starting producing small strombolian explosions from the Southeast Crater Cone (see below). You can check out a full description of the renewed activity on the INGV-Catania website (written by, surprise, Dr. Boris Behncke – be sure to follow him on Twitter for all sorts of updates). This is now the third eruption at Etna since the beginning of 2011. Eruptions reader Pgen Pgen also posted a timelapse of some of the April 9-10 activity at Etna.

UPDATE: Here is today’s (April 10) update on the activity at Etna, from INGV-Catania. 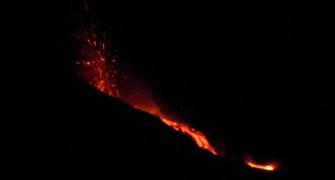 Strombolian activity and lava flows from the Southeast Crater at Etna, seen on April 9, 2011. Image courtesy of INGV Catania and Boris Behncke.

Feel free to leave any more info or images you find for the new activity. Remember, there are tons of webcams pointed at Etna, so if the eruption continues, you’ll likely catch a glimpse (or more).

Top left: Webcam capture of Etna on April 10, 2011 by Eruptions reader Raving. The new lava flow can be seen on the upper right-hand slope of the volcano. Click on the image to see a larger version.

Photons come in every wavelength you can imagine. But one particular quantum transition makes light at precisely 21 cm, and it’s magical.
Up Next
Surprising Science

On average, a brain’s short term memory can only hold between five and seven pieces of information at a time. Can steps be taken to expand the capacity of our memory—and our brains generally?