Claims about the size of rallies on the National Mall are an important framing device that advocates and journalists use to communicate the strength and impact of a movement. Of course, accurately judging the size of a rally is a difficult challenge.  Using a unique aerial photograph methodology, CBS News and research firm AirPhotosLive.com estimates Saturday’s Rally to Restore Sanity turned out 215,000 attendees, almost three times the size of the Glenn Beck rally.

The methodology is not without debate.  When CBS and the research firm estimated the Glenn Beck rally at only 87,000, it prompted claims of liberal media bias from Beck and others.  CBS responded with a detailed account of their methodology.

Even more challenging than estimating the size of a rally is accurately determining the background, attitudes, and political views of the rally participants.  That was our goal Saturday, as I joined with AU colleague Lauren Feldman and 15 communication students to conduct more than 200 face-to-face survey interviews with participants.

We employed a unique cluster sampling strategy that led to an approximately representative sample of respondents. Check out the photo of our survey team below as the students prepare to head out into the field.

Next week, we will be releasing a report on our survey findings, featuring an analysis of the backgrounds, political views, voting preferences, media choices, and associational ties of the participants in the rally.  Look for much more here at Age of Engagement. 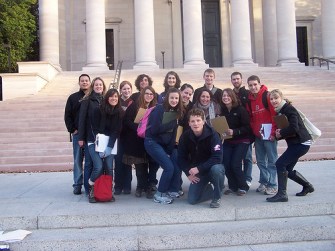 Is America a Joke? Researcher Examines The DailyShow‘s Impact on Political Culture

Distraction or Engagement? Researcher On What Viewers Learn from The DailyShow

The DailyShow: The Best Place for Engaging Wider Audiences on Science?

I’ve been at the 2010 GSA Meeting for the last day or so and as usual, there is more information that I can handle. However, there is a lot of […]