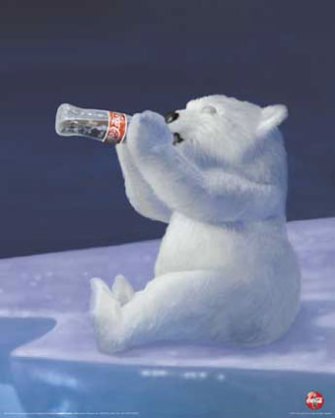 The Guardian has the details on the PR tactic of polar bear photos to (over)dramatize the impacts of global warming, tracing the idea to a 1993 Coca-Cola campaign. Here’s a little bit about the strategic use of “cuddly anthropomorphism on the tundra”:

One photograph in particular has captured the imagination. In a neat piece of marketing, the Canadian Ice Service made available a stunning image to coincide with the IPCC report. Two bears, probably a mother and her cub, are pictured on a spectacular ice block off northern Alaska that might have been modelled by Henry Moore. They appear to be howling against injustice. The drama is clear: this is truly the tip of an iceberg, the bears are desperately stranded as the water swells around them. The first thought among viewers is surely one of pity and concern, but this is to misjudge the situation: polar bears are reasonable swimmers, and certainly climbed upon such sculptures centuries before we climbed into our 4x4s. ‘Initially I thought the picture was a Photoshop fake,’ Dr Ian Stirling, senior research scientist with the Canadian Wildlife Service, emails from his home in Edmonton. ‘But I have since checked and it is authentic. There is no doubt the photo is used because of its dramatic effect, and it is true it does not represent the kind of sea ice bears normally live on and depend upon for hunting seals.’ 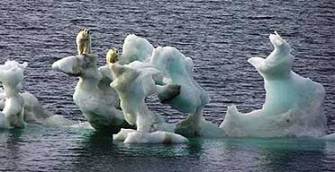