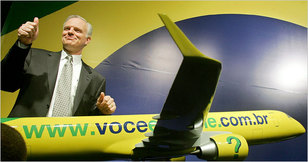 The founder of JetBlue, David Neeleman, recently announced plans to launch a new Brazilian airline. As the New York Times points out, Neeleman has a Brazilian passport and speaks fluent Portuguese, so the move is more logical than it might sound. Plus, the Brazilian economy is one of the world’s great emerging markets, so it’s easy to see that the creation of millions of middle-class Brazilians will lead to surging demand for a cool, hip Brazilian JetBlue.

The most brilliant thinkers in the world

The May 2008 issue of Portfolio magazine (“the brilliant issue”) has a listing of the 73 most brilliant thinkers in business – the rebels, upstarts, game changers and connectors who […]