According to a recent press release: NASA’s Lunar Reconnaissance Orbiter, or LRO, will complete the exploration phase of its mission on Sept. 16, after a number of successes that transformed our understanding of Earth’s nearest neighbor. 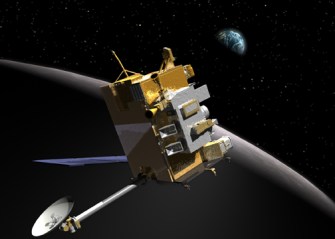 “Results from the mission include: new observations of the Apollo landing sites; indications that permanently shadowed and nearby regions may harbor water and hydrogen; observations that large areas in the permanently shadowed regions are colder than Pluto; detailed information about lunar terrain; and the first evidence of a globally distributed population of thrust faults that indicates the moon has recently contracted and may still be shrinking.” Download the LRO/LCROSS Press Kit from the NASA Website.

We’re not 100% positive how the moon was formed in the first place, but there is evidence to suggest that a planet-sized object crashed into the Earth and gouged out a massive fiery chunk that then settled into orbit around us. I am sure that most of you are wondering what the evidence was that suggested this in the first place? Well, the rocks that we have brought back from the moon revealed that it was molten at some point, which is a good indicator of a major head-on collision with an object that may have been as big as the planet Mars. So, it’s very likely that our planet, in a sense, collided with another planet, and that this occurred very early—perhaps thirty to fifty million years after the origin of the solar system. So we could also assume that similar occurrences happened to some of the other planets in our solar system. For hundreds of millions of years after the creation of our solar system, it was a violent place to be. Something may have plowed into the planet Uranus causing it’s orbital plane to be 90 degrees tilted from the plane of the solar system, Venus, for example, rotates slowly, in reverse; Mars has tremendous mountain ranges in the south but not in the north.

Just last month, reports and new studies stating that our moon was in fact shrinking dominated the headlines and thousands of blogs and news feeds circulated the Internet over night. The research was led by Dr. Tom Watters from the Smithsonian National Air & Space Museum and involved searching and reviewing thousands upon thousands of lunar images for fault structures called Lobate Scarps. Dr. Watters recently told AOL News that “We know it’s shrinking by looking at these landforms called lobate scarps that kind of look like stairsteps in the landscape and they’re caued by thrust faults, which are generated when the lunar crust material is pushed together and pushed up forming a cliff or scarp.” These lobate scarps of course are nothing new and were first recognized in photographs by various camera flown on a few Apollo missions in the early 70s. But the cameras that flew on Apollo weren’t designed to capture widespread photos of the entire lunar surface. They were actually limited to smaller portions in the equatorial zones. So the LRO has provided us a proverbial game changer in the sense that the ultra-high resolution images are revealing a considerable amount more of these scarps than we were originally aware of. It’s currently assumed that the overall gradual cooling of the interior of moon is what is causing the shrinkage over such a long period of time. According to the actual study, there has been just over 300 feet ofchange in the moon’s radius over the course of about 1 billion years.

Image Below: A scarp or fault from the shrinking moon has deformed or partially covered small ~125-foot craters (arrowed). The fault carried near-surface crustal materials up and over the craters, burying parts of their floors and rims. About half of the rim and floor of a 60-foot-diameter crater shown in the box has been lost. Since small craters only have a limited lifetime before they are destroyed by newer impacts, their deformation by the fault shows the fault to be relatively young. Credit: NASA/Goddard/Arizona State University/Smithsonian 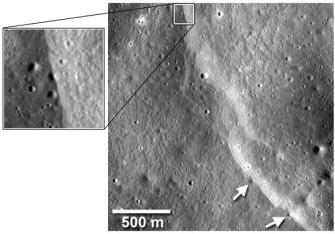 As far as the panic that the moon is going to dwindle away into something the size of a bowling ball—don’t hold your breath.

Every week, it seems, we get more bad news about the economy. Today the Census Bureau reported that the median household income in the U.S. fell several hundred dollars in […]