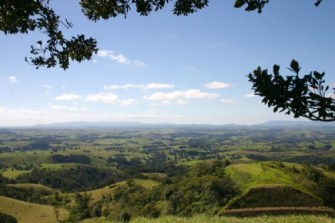 Nothing makes me shudder like any article titled “Blankety-blank volcano is overdue”. Typically the article that follows is full of nothing but vapid speculation and media fear-mongering. So, it wasn’t too surprising that an article titled “Volcano eruption ‘overdue’” in the Brisbane Times (amongst many other sites) didn’t disappoint (or, in particular, it did). Dr. Bernie Joyce is quoted as saying “It is much more likely to be a matter of when, rather than if…” in regards to potential future volcanism on the Australian continent. Well, OK, yes, there will, again, someday be volcanism again on Australia … and I am all for preparedness, which I think is the point that Dr. Joyce is trying to make. However, by saying any volcanism system is “overdue” based solely on the fact that there hasn’t been an eruption for a long period is foolish at best.

The “data” pointed out is that in Far North Queensland, there are eruptions every ~2,000 years over the last 40,000 years, yet now it has been 5,000 years since the last eruption. That is the sort of silly “predictive” science that gives volcanology a bad name. Sure, it there is a statistical chance, but to say that it is “overdue” because it hasn’t eruptive in the known repose interval, is tenuous at best. Sure, there is likely a close to 100% chance that a volcano will erupt in the region again, but that is the same as saying that if you sit at an intersection long enough, you’ll see an accident. It will happen, but it is definitely not “overdue”.

Australia is not typically considered a very volcanically active area, mostly because it is about as stable a continental craton as you can get, with no active subduction near the continental part of the plate. This means that most, if not all, of the volcanism on the Australian continent is related to a “hot spot”, similar to Hawai’i or Yellowstone (just with a lot less energy to create volcanism). There are a number of volcanic fields, including the Newer Volcanic Province field in South Australia. It is a small scoria cone and shield volcano field that last erupted in ~2,900-3,000 BC (based on 14C dating) from Mt. Gambier and Mt. Schank. The volcanoes produce basaltic lava flows and phreatic eruptions, which is fairly typical for this type of field. You can see that there is an awful lot of volcanism in the region over the recent (geologic) past. The volcanic field mentioned by Dr. Joyce in Far North Queensland is likely the Atherton Volcanic field (which, incidentally, doesn’t make it into the GVP). Similar to the Newer Volcanic Province, the Atherton field is a scoria/shield volcanic field that stretch back at least 3 million years.

The second Mystery Volcano Photo was apparently way too easy for you savvy volcanophiles, so here’s another to test you over the weekend.