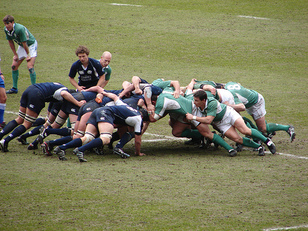 Within Scotland, economic development leaders are debating what to do about the country’s “chronically low level

of innovation” — a situation made all the more distressing by the ability of their rivals, the Irish, to become global innovation leaders. (According to research firm Forrester, Ireland is now an “innovation hub” and one of the most innovative countries in Europe.) In an op-ed piece for the Sunday Herald (U.K.),

of business development and commercialization at Glasgow Caledonian University, argues that Scotland needs a national innovation agency to become a global innovation leader.

This agency would be able to leverage the

collaboration of academia and business, and bridge the space

between the public and private sectors. Instead of turning to the Irish

for ideas about innovation, Crawford suggests that Finland represents the best role model for Scotland:

“Finland may point the way to a possible solution to what we need.

Its public bodies, such as Sitra and Tekes, have been operating in the

space between public and private sectors for decades, acting as honest

brokers to bring together universities, businesses and investors. Their

raison d’etre is “innovation” and both are influential in the

about creating a Scottish model…”

In many ways, this is an issue of national pride. The Scots are obviously a bit irked that the Irish are taking the lead when it comes to innovation and then bragging about it. The Irish have been touting their

status as innovation leaders by running special promotional sections in

international business magazines and newspapers, including the Wall Street Journal. According to Crawford, though, the Scots are no less talented than the Irish:

“Now, while not wishing to denigrate or devalue what Ireland has

achieved in upgrading its R&D infrastructure nor its innovation

level, I can’t help thinking that a 12.5% corporation tax rate has

article proudly proclaims. In fact, I am prepared to make a small wager

that the intellectual capital within Scotland’s higher education

institutions is substantially better than in equivalent disciplines and

Scotland really does have world-class research, which is one of the

reasons why the US pharmaceutical company, Wyeth, through the good

offices of Scottish Development International decided to form a

[image: Scotland vs. Ireland in rugby]

This thought-provoking cartoon, distributed by the Universal Press Syndicate, is called Unclestiltskin. What happens to America when we deplete all of our natural resources and realize that we’ve squandered away […]