What happens when an artist loses his or her creative currency – the capacity for self-expression? That’s exactly what happened to legendary Los Angeles graffiti artist Tony Quan, a.k.a. Tempt One, when he was diagnosed with amyotrophic lateral sclerosis, better known as ALS or Lou Gehrig’s disease. As he began to lose use of his arms and legs, ultimately ending up unable to speak or breathe on his own, Tempt retained full mental clarity and, more importantly, a burning desire for artistic expression as strong as it ever was — a clearly, painfully frustrating paradox.

Now, thanks to a revolutionary eyetracking device dubbed EyeWriter, Tempt can use his eyes – still fully mobile – to draw graffiti. 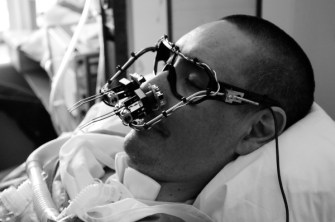 EyeWriter is an ongoing research project from Graffiti Research Lab, a collective of artists, urban pranksters and hackers who stage multimedia interventions around the world. Many of them were among Tempt’s closest friends, which made his diagnosis as much a devastation as it did an inspiration to intervene through innovation. So they mounted a small camera onto a pair of clunky eyeglass frames, and wired it so that the camera captures the pupil of Quan’s right eye, inputting it as it glides over a palette of colors and effects. To select a tool or color, he “clicks” by holding his gaze over it for four seconds He “clicks” by pausing his gaze for four seconds over the desired tool, then draws by moving his gaze around the canvas screen. Rather than saving the artwork in traditional JPG or GIF image formats, which have a number of limitations, output is saved in a GML format – Graffiti Markup Language, a new open-source format developed specifically for EyeWriter. Tempt then uploads his work to a server, from which his supporters have pulled it wirelessly to digitally project Tempt One “eyetags” onto everything from high rises in Los Angeles to Tokyo’s city halls to the riverbanks of Vienna. 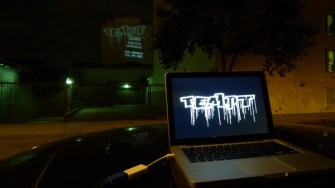 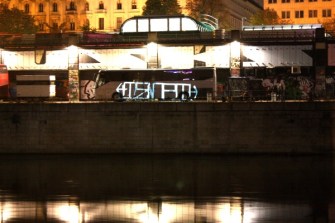 While expensive eyetracking devices have helped other ALS patients, perhaps most famously Stephen Hawking, what makes EyeWriter particularly compelling is that it’s an incredibly low-cost technology hack – it’s a $50 device – that achieves a great deal yet requires very little.

Zach Lieberman, one of the lead developers on EyeWriter, presented the project at this year’s PSFK Conference in New York, noting that the underlying principle of the tool is not one of technology but one of empathy – an effort to practice empathy, rather than sympathy, towards its users. And that is “design for social good” at its best – an enabler of empathy, of humanity at its best and most compassionate.

Whether you call it the “Tiananmen Square Massacre” or the “June Fourth Incident” (as it’s known in the People’s Republic of China), what happened in Beijing 21 years ago today […]