This post is mostly to show some of the great images that the Daily Mail posted about field work performed inside a crater at Thrihnukagigur* in Iceland – literally, the team lead by Dr. Freysteinn Sigmundsson rappelled into the open crater as part of a fissure along the part of the Mid-Atlantic Ridge that crosses Iceland. Now, the shots are quite spectacular (see below, top left or the link to the original story), but the text that went with the story is, well, what we might expect from the Daily Mail.

First off, the proclaim in the first line: “For the first time in history scientists have descended 650ft into the magma chamber of a volcano.” I think there is some confusion about exactly how the plumbing of a volcano is organized. 650 feet is only ~200 meters, which is barely scratching the surface of the Earth. Although this space in which the geologists explored likely had magma in it, it is hardly the volcano’s “magma chamber”, especially in Iceland were magma can be stored many kilometers to tens of kilometers deep. This space that was explored is more like a lava tube system that opens to the surface – much like the East Rift Zone of Kilauea and the crater at Pu`u O`o in Hawai`i. There are vast networks of underground lava tubes – some vertical, some horizontal – that run under the east rift zone. There are likely petrologic processes going on in these spaces – crystallization, magma mixing – but it is by no means the great storing tank of the volcano. The Daily Mail article goes onto say “Only now – 50 years since the first man went into space – have human beings visited the only magma chamber on the planet currently safe to explore.” I just have no idea where to start. There are plenty of magma chambers we can explore … on extinct, eroded volcanoes. There we can see what was in the magma chamber at different parts of its history, and it is still a “magma chamber**”. 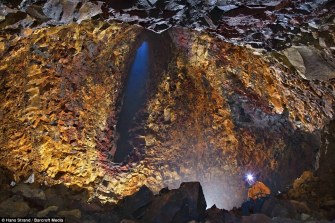 Descending into open space within Thrihnukagigur in Iceland. Note the red, oxidized zone along the vertical vent – this suggests a lot of hot gases escaping, altering the basalt wall of the vent.

Even the description of the volcano by Dr. Sigmundsson suggests what we’re really seeing is a complex lava tube system (see below) rather than the “magma chamber”: “It’s like somebody came and pulled the plug and all the magma ran down out of it.” He goes onto say “this magma then drained out and created an “open part” of the magma plumbing system we could explore. These channels were on the order of two to six foot wide.” That, to me, says lava tube system, not the “magma chamber” of a volcano.

I suppose a lot of the overblown description is thanks to the fact that is was part of a National Geographic special on exploring Thrihnukagigur***. This is all well-and-good – any research into the plumbing of a volcano is exciting and likely groundbreaking. However, to cast it in a light of descending into a magma chamber at an active volcano is pandering to the “extreme” audience if ever I heard it. This was fairly straightforward spelunking into a lava tube system at a young volcano. Definitely cool, but not “inside the heart of the volcano” as the Daily Mail and National Geographic imply.

*I tried to find into on Thrihnukagigur everywhere and came up empty. Any of your Icelandiphile Eruptions readers have more information?

**One other problem is that of semantics – what exactly is a “magma chamber”? The classical model is of a vast cauldron of magma kilometers wide churning in the crust. It appears that this model is likely not realistic as we rarely see evidence of that much molten rock in the crust. Instead, most magmatic systems (as I prefer to call them) are likely stacks of sills and dikes – flat-lying or vertical intrusions – that overlap with time. This debate is still quite a lively one in geology.

***Alternately, maybe I’m just splitting hairs here, which very well could be considering how dreary it is here in Granville today. Whatever it is, the description just rubbed me the wrong way.