I spend a lot of time hunting for cool stuff. Garage sales, estate sales, yard sales, antique stores, junk shops – you get the idea. I spend more time looking than I do finding but the thrill is in the hunt and sometimes the hunt itself is its own weird reward.

Often while hunting I get a feeling I call my “Spidey-Sense,” named after Spider-Man’s famous psychic awareness that gets him out of trouble. I know I want something in the room but I just can’t put my finger on it. I will go back to a room or store section I’ve already looked at due to the nagging sensation that I missed something. I hate missing stuff. For collectors of stuff, nothing is worse than standing at the check-out table in front of the guy with the early Elvis Sun recording on 78 or a rare comic book you missed.

Now, I don’t believe my Spidey-Sense is a real extra-sensory or paranormal ability but I do think my subconscious is picking up on subtle clues my conscious mind is missing. These clues present themselves as intuition, a hunch, or just the lingering sensation that I’m a dumbass.

I don’t remember if my Spidey-Sense tingled when I found Kreskin’s ESP board game but I certainly didn’t see it coming. This 1966 production from Milton Bradley is a combination game and home psychic testing kit that is, as they say, fun for the whole family. 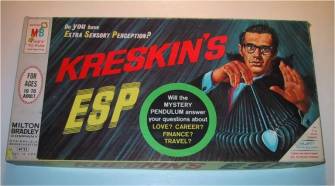 The Amazing Kreskin is so well known today that his stage name is virtually synonymous with mentalism. Kreskin is actually so famous as a mentalist that he appears in American pop culture twice – once as himself and again as Johnny Carson’s famous Carnac the Magnificent character. Carson* is rumored to have created the character after watching Kreskin stumble as he went on stage for his very first TV appearance on The Steve Allen Show in March of 1964. Despite tripping on his entrance, Kreskin’s career exploded soon after and by 1966 he had his own board game – Kreskin’s ESP.

The “game” itself involves the testing of psychic powers using traditional tools such as the “Mystery Pendulum” and Symbol Cards with various designs and colors on them.

Kreskin’s Symbol Cards are meant to evoke the classic Zener Cards developed by psychologist Karl Zener (circle, cross, square, star, wavy lines) and used by parapsychologist J.B. Rhine to test subjects at Duke University and later used by parapsychologist Peter Venkman to pick up coeds at Columbia University. You can use the game’s testing equipment to rate your psychic score which is about the only actual competition the game allows. 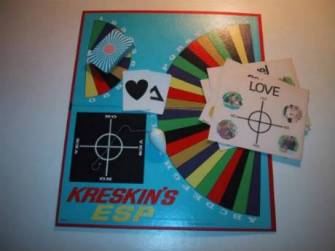 The pendulum (here plastic but traditionally metal or crystal) has been used for thousands of years as a tool of divination (and dowsing) and the game offers several methods of use including answering questions about love, finance, travel and career prospects.

Ironically, scientists searching for ESP and other psychic abilities had largely abandoned these older methods of testing by the time the game was released, relying instead on meditation, relaxation, and other techniques.

Kreskin has always been careful to avoid claims of supernatural or clairvoyant abilities and the game instructions are quick to point out (in bold type) that NO CLAIMS OF MYSTICAL OR SUPERNATURAL POWERS ARE MADE FOR THIS GAME EQUIPMENT OR DEVICES SUPPLIED IN THIS GAME.

The instructions also note that Kreskin’s study of mental powers is called Psychosonics, the “application of skills which are dormant and unrealized in millions of people.” Kreskin has moved away from claims of Psychosonics since the 1960s and these days explains his abilities thusly: “In most cases the phenomenon of thought transference can be explained as a kind of hyper-aesthesia — an almost unconscious raising of the threshold of one’s senses to a degree far exceeding one’s everyday feelings.” This is probably just a fancy way of saying he really deserved that honorary Ph.D in psychology but that doesn’t sound nearly as cool.

One of the most striking things about the game itself is the uncanny resemblance the illustration of Kreskin on the box cover has to actor Jeff Goldblum. It’s as if the game itself predicted the world would need a quirky actor to play off-beat scientists in the movies.

Kreskin still performs at age 76 and gives no indications of slowing down, playing multiple dates a year and still making the occasional television appearance. Recent reviews of his shows indicate he hasn’t lost a step after 50 plus years of performing.

Fittingly, Kreskin claims to have first discovered his “powers” as a youth while playing the simple kid’s game of “Hot and Cold.” He seemed to be able to tell what area was hot just by the subtle behavior of the person who had hidden the item to be discovered. With years of practice he honed his intuition to a keen edge.

*Johnny Carson also has a more direct connection to Milton Bradley. In the sixties, Carson featured the game Twister on his show and his contortionistic cavorting with guest Eva Gabor made the game attractive to adults and led to sales of millions.

–Guest post by Patrick Riley, AoE Culture CorrespondentThere was a time when mainstream media coverage of an upcoming movie would create buzz about the film. Nowadays, publications like the New York […]