Many of you are familiar with Rogers’ diffusion of innovation theory, even if you didn’t know its formal name. Dr. Everett Rogers is probably most famous for popularizing the following diagram: 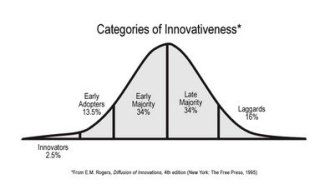 We often think of this bell curve when we initiate new technology initiatives: Who are the innovators that will jump at this first? When do we start involving folks other than the early adopters? How do we get the rest of the folks (i.e., the late majority and the laggards) on board? And so on…

But Rogers also talked about how the adoption of any innovation (i.e., change) tends to occur in five stages:

And, importantly, he also discussed what he called perceived characteristics of innovations. These are things considered by potential adopters that affect how likely those potential adopters are to move from awareness to adoption. They are:

Innovations that have greater relative advantage, compatibility, trialability, and observability, along with less complexity, generally will be adopted over innovations that do not.

Numerous school technology initiatives fail to result in widespread changes in educator practice. One prevalent reason is because they did not adequately address the very rational concerns that educators have about one or more of these perceived characteristics of innovations. Anyone who is trying to make wide-scale change happen in their school system must address these sufficiently to alleviate the concerns of the late majority and laggards. Otherwise only the innovators and the early adopters will jump on board, along with some, but not all, of the early majority. I’m sure all of you can think of instances of this and hope you will share some in the comments area.

Random musings. Half-finished (and quite possibly half-baked) thoughts.nThings that have caught my eye…nOne of the most interesting articles I’ve read in a longntimenAttractingnthe twentysomething worker. Describes how the workplace is […]