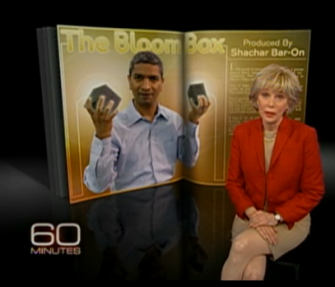 Walk down the street of any community in America and look up – what do you see? A mass of tangled wires that comprise the high-voltage tranmissions lines of the nation’s power grid. If you’re like most people, the wires are almost invisible to you in everyday life — the only time you might notice them is when there’s a down power line after a massive thunder storm. But the idea of buying electricity that has been stored and then transmitted over hundreds of miles of power lines by a monopoly power provider (i.e. your local utility) is, quite frankly, anachronistic.

What if there were a power source that was clean, efficient and relatively inexpensive that you could turn on and off as you needed it, without the need for wires? That’s exactly what KR Sridhar of Bloom Energy has in mind for the future of clean energy in America. Each of his company’s Bloom Boxes is powered by a stack of wafer-thin slices of silicon that have been specially treated. Two of his Bloom Boxes can power a single American home — and one day they may be bought and sold the same way that you purchase electronics in a consumer retail destination like Best Buy.

In a recent 60 Minutes segment with the charming and indefatigable Lesley Stahl, Bloom’s CEO KR Sridhar (named one of the Top 20 Most Creative People in America by Fast Company) gave the first-ever behind-the-scenes look at how the company is developing next-generation energy devices. Bloom is backed by hundreds of millions of dollars of West Coast VC money, leading to increased speculation about what the company is poised to accomplish. Already, corporate clients such as FedEx, Walmart, and Google are experimenting with them as ways to power their businesses at just a fraction of the cost of using traditional energy. Bloom Energy says that renewable energy sources  like the sun or biofuels could power their Boxes – not hydrogen or rich hydrocarbon sources.

If so, one day, Bloom Boxes may make the entire national power grid obsolete. Who needs wires connected to tree poles and ungainly electricity transmission stations when you have all the energy you need in a box, available in the comfort of your own home? At the end of the day, of course, it all comes down to cost. If it’s cheaper to power your home or business with wind power or solar fuel cells, you won’t be as likely to plunk down the cost for a Bloom Box.

For more on KR Sridhar and Bloom Energy, be sure to check out The Economist’s upcoming Intelligent Infrastructure event, February 16-17 in New York City.

The researchers and patients are excited to see if color vision will develop over time.
Up Next
Culture & Religion