Over the last few weeks, the Dieng Volcanic Complex (also known as the Dieng Plateau) in Indonesia has been increasingly showing signs of potential eruptive activity. The complex began experiencing increased gas emissions and seismicity that culminated in a small phreatic explosion this week, all suggesting that magma is rising under the complex, specifically under Timbang. Now, usually when a volcanic system like this shows signs of an impending eruption, the concern is the hazard of ash, pyroclastic flows, lahars and possibly lava flows. However, although the Dieng Volcanic Complex has produced these hazards in the past, especially lava flows and ash, it is a bit of different as many of the deaths attributed to volcanic activity there are from volcanic gas emissions.

Magma, on the whole, is gassy material – that is, it can have a lot of different types of volatile elements and compounds dissolved in it. On the whole, magma can keep more gas dissolved in its structure at higher pressures, so bubbles form as the magma rises. If the ascent is slow enough or the magma has a low enough viscosity, these bubbles will escape passively. If they can’t escape, pressure will build in the magma as the bubbles grow and coalesce until the magma’s yield strength is met and it fragments, producing an explosive eruption. Interestingly, as you add more volatiles to a magma, the viscosity will actually go down, but usually not enough to allow for passive degassing in many situations. Far and away the most abundant is water, sometimes as much as a few weight percent of the magma, which we see as steam plumes at volcanoes (see below) produced by the water coming out of solution as the magma rises – we would say the magma is “degassing”. Another abundant compound is carbon dioxide, maybe as high as 0.5 weight percent, again something that is degassed as the magma rises. Other common dissolved gases in magma include sulfur dioxide, hydrogen sulfide, chlorine, fluorine, carbon monoxide and even rarer gases like argon, gold, lead and many more.

The plume at Soufriere Hills at Montserrat in September 2009, dominantly composed of steam and other volcanic gases (with a minor component of volcanic ash). Click here to see the original NASA EO image.

So, even if a magma isn’t erupting but just rises slowly to the surface or just sitting in the crust cooling, it will degas. As a mentioned, much of this gas is harmless water vapor, but if large concentrations of carbon dioxide are emitted, then these gases can become very hazardous. Remember, carbon dioxide is heavier than air, so it sinks into depressions and stays there unless there is wind to mix the carbon dioxide with normal air (and sometimes produce volcanic fog – or vog). There are many cases where carbon dioxide has killed trees and animals that were located in places where carbon dioxide will collect – most famously at Yellowstone Caldera and the Long Valley Caldera. However, there have been a number of human disasters that were also caused by volcanic carbon dioxide. Two of the most famous occurred in Africa at Lake Nyos and Lake Monoun, where carbon dioxide in volcanic crater lakes collected at the bottom of the lake and was then catastrophically released during a lake water overturn event (likely not even related to an eruption), sending carbon dioxide “flowing” down the slope of the volcano. This carbon dioxide asphyxiated people living at the foot of the volcanoes (video) when it replaced the low-lying air at the villages with carbon dioxide, killing thousands. The people really had no warning either, as carbon dioxide is odorless and colorless. However, now that the hazard has been recognized, mitigation efforts are in place to release the carbon dioxide into the atmosphere before it can collect into deadly quantities (see below). 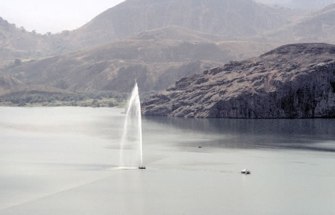 Top left: Undated image of the steam emissions from geothermal areas in the Dieng Volcanic Complex.

Surely they can’t be worse…can they?
Up Next
Technology & Innovation

The New York Times CEO whisperer Adam Bryant advocates fearlessness as a virtue that will help people make decisions both great and small, positively impacting both their careers and daily lives.