Scientists at CERN laboratory in Switzerland scored a major breakthough recently when they trapped atoms of anti-matter for the first time in history. Fans of Star Trek know the potential implications of this achievement, since the Starship Enterprise uses matter/anti-matter annihilation to drive its engines. Maybe one day, we might be able to use anti-matter engines to take us to the stars. 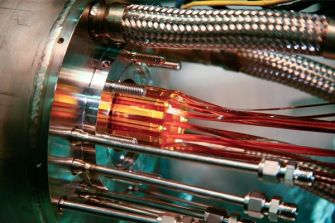 A detail of the trap used to combine positrons and antiprotons to create antimatter atoms. Photograph courtesy Niels Madsen, ALPHA/Swansea/CERN 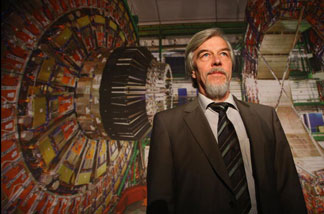 (Sean Gallup/Getty Images) Rolf-Dieter Heuer, the director of CERN, the European Organization for Nuclear Research, poses in front of a giant photograph of the CMS detector of the Large Hadron Collider (LHC) at the ‘Weltmaschine’ (‘World Machine’) exhibition on October 14, 2008 in Berlin, Germany

The advantage of using anti-matter is that it is potentially 100 times more powerful than an ordinary H-bomb. Nuclear bombs are only 1% efficient in converting mass to energy (via Einstein’s famous equation). But anti-matter, when in contact with matter, yields a 100% efficient conversion of mass to energy. In principle, it is the greatest energy source in the universe.

Anti-matter was first predicted by physicist Paul Dirac, who won the Nobel Prize for it in 1933. It resembles ordinary matter, except it has the opposite charge. So an anti-electron has positive charge, and an anti-proton has negative charge. (Anti-electrons can be produced via radioactive decay. In fact, when I was in high school, I built a detector which photographed tracks of anti-matter. Later, I designed an atom smasher, whose purpose was to produce a beam of anti-matter). Watch a clip from my Big Think Interview speaking about my atom smasher. Anti-hydrogen, produced at CERN, has an anti-electron revolving around an anti-proton.

Anti-atoms at CERN were first produced back in 1995, but they only lived briefly before they annihilated with ordinary atoms. This time, physicists at CERN were able to trap 38 anti-hydrogen atoms (in a combination of magnetic and electric fields) for about 1/10 of a second, a remarkable achievement. It will take many, many decades or longer to produce large quantities of stable anti-matter, however. (In the movie “Angels and Demons,” Tom Hanks has to stop terrorists who stole anti-matter from CERN and want to use it blow up the Vatican. Only a gram would be enough to blow up most of Rome, but producing a gram of anti-matter is way beyond our capability. It would bankrupt the U.S. to do so.) 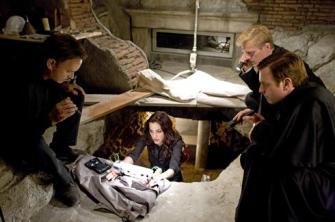 So although the recent achievement at CERN was a milestone, it may take many decades to centuries before we can harness the full power of anti-matter. (This time period may be shortened if we find an anti-matter meteorite in outer space.) But Star Trek takes place in the 23rd century—so we still have plenty of time.