No one expects a wildly optimistic vision about the future given the staggering economy in the United States and nearly everywhere else. Struggling to survive the now makes it difficult to envision a better tomorrow. America’s sources of strength are not location, resources, population, technology, military and economic might alone – American optimism has always been the secret sauce used to translate these physical resources into real power and global competiveness. Rasmussen Reports recently released findings from a survey of 1000 eligible American voters conducted October 26-27, 2011 asking respondents if they believed that “America’s best days were” in the future, in the past or not sure.

The data suggest that America is running low on optimism. Rasmussen shows that no age group see’s a clear and optimistic future for America. 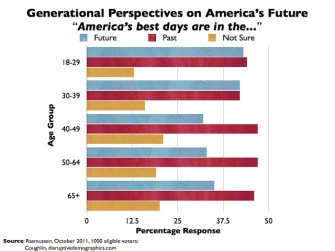 Even the oft cited ‘youthful optimism’ of Americans ages 18 to 29 and 30 to 39 years old shows only about 42% believing that America’s best days are yet to come. A nearly equal proportion believes the best days were yesterday’s news. Controlling for error, the difference between the two groups is, at best, is even and in the statistical noise leaving us guessing is America’s future half-empty or half-full?

But what about the baby boomers – remember, the generation who believed they could and would change everything? Unlike younger cohorts Americans 40 years old and older are overwhelmingly negative about the nation’s future. Almost half of the baby boomers and older respondents believe that America’s future will not be as great as its past – with anywhere from a 9 to 15% margin forecasting gloom compared to the little more than a third that see a brighter future ahead…or at least see the glass as half-full.

Clearly the economy has taken a toll on everyone’s attitude. What is striking is that younger Americans 18 to 39 year olds – hit harder by the downturn than middle aged and older baby boomers – have at least a 10% margin of optimism over their far more dour parents and grandparents.

America’s youth who see the glass as half empty can accuse their more upbeat friends of foolish optimism but attitude, positive or negative, can be a self-fulfilling prophecy to be managed wisely. But, generally speaking the 18 to 39 year olds have not assumed positions of leadership in business or government – the baby boomers are still in charge.

The baby boomer generation is often credited with changing everything – now that they have changed so much they are apparently not that happy with what the future may hold. Leadership is about envisioning a better future and weaving a wise and resolute story of how to get there. A story that is so compelling that everyone understands what needs to be done and then does their part to realize that vision. The economy requires adjustment, but even if the economy changes direction for the better the attitude of those in charge must change to ensure a future that is at least as good as the nation they inherited…or better.

–Guest post by Jamie Schleser, American university doctoral student.Technological advances in how we communicate, from the advent of the printing press to the launch of the World Wide Web, have […]