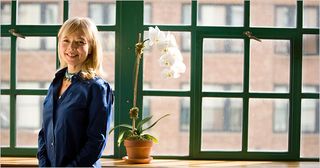 Even during a recession, pockets of innovation are forming across the country. Business Week recently put together a great pictorial feature on 75 of America’s Most Promising Start Ups. Some of these companies are a bit, well, quirky — like a company that produces a product for picking up manholes quicker and easier or the (no joke) oven claw company — but many of the companies identified by Business Week are helping to provide real solutions to seemingly intractable problems.

“Some people you just shouldn’t mess with. When Turkish-born Banu Ozden

treatment costs after being diagnosed with breast cancer in 2005, she

got mad. And she got madder still as she went through treatment and

that didn’t accurately reflect what she owed. When she finally sorted

through the mess, she discovered that she had overpaid by about $4,000.

Instead of simply complaining, Ozden, 44, decided to get even.

a computer science professor at the University of Southern California

and director of computing systems research at Bell Labs,

no money on marketing but already has 1,000-some registered users who

plans to make money by selling ads to medical and pharmaceutical

companies. Though Banu continues to undergo cancer treatment, she says

Innovation in the healthcare space is, in my opinion, just starting to heat up. Once the doors to U.S. healthcare reform get flung wide open, look for new innovations in “branded healthcare” as well. Any other ideas for start-ups (or established companies) that are coming to market with game-changing innovations?