Normally I don’t fall too far behind when it comes to the plethora of volcano images that show up on the friendly confines of the interweb. Well, this week looks to prove me wrong with a collection of images that are not only bountiful but also rather stunning.

I get the impression that sometimes the folks over at the NASA Earth Observatory get volcano fever and this week it seems to be in full force. There were no less than four great volcano images over the past few days. Two came from the snowy Kamchatka Peninsula in Russia. The first has a strong steam-and-ash plume from Kizimen (see below), who has been having a busy winter so far in 2011 as the ash fall on the snow and ground around the volcano would attest. The second image shows tan ash fall and dark brown pyroclastic flow deposits from a recent eruption of Shiveluch. We saw the thermal image of the pyroclastic flow in another NASA EO shot from January 25, but this ASTER image captures the pyroclastic flow deposit at the base of the volcano, all coming from the growing lava dome at the volcano’s summit.

Across the world, the NASA EO posted an image of a Mexican volcano with which I was not familiar: Pico de Orizaba, also known as Citlaltépetl, taken from the International Space Station. I suppose I should be more familiar with it as it is Mexico’s highest peak at over 5675 meters / ~18,600 feet, but the volcano hasn’t erupted since 1846. Most of the eruptions from Orizaba are VEI 2 explosive events, but the NASA EO image has an impressive lava flow on the western flank – a coulée, likely of dacite composition.

Finally, we were offered an image of SP Crater in Arizona. The small scoria cone is part of the San Francisco Volcanic Field and is thought to have last erupted as recently as 4,000 years ago. The cone has a breach lava flow that issues from the bottom of the scoria cone, not the summit vent, which is common for such volcanoes. Remember, scoria cones are merely piles of debris erupted from the vent and stacked close to the angle of repose. Many times lava flows will break through the cone, such as at Sunset, La Poruña in Chile or Collier Cone in Oregon. 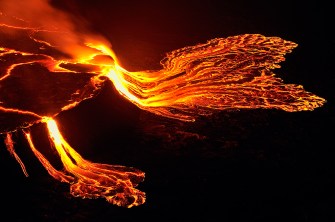 Lava flows breaching the edge of the lava lake at Nyiragongo, Congo during a June 2010 expedition. Click here to see the full image.

In non-EO images, Boston.com’s Big Picture had a series of images from an expedition to the crater area of Nyiragongo in the Congo. The lava lake in the crater is very actively – and oddly “perched” (as Jessica Ball put it). The short rim of the lava lake allows breakout lava flows (see above). The expedition climbed down into the crater to see the action and sample the volcanic gases. More likely than not, the expedition would have been safe if the activity was confined to the lava lake, but you never know when you’re camping inside an active volcanic crater.

Finally, Jorge Santos sent a series of images from a recent trip to Bromo in Indonesia. Jorge posted images of both the damaged area near the volcano, covered with volcanic ash along with shots of the wilds around the volcano. I got a couple other shots from Bromo (see one below) sent to me by Michael Dalton with Volcanic Odysseys as well, all showing the active vent from Bromo. Michael also posted some video from the expedition and you can check out Tom Pfeiffer’s (of Volcano Discovery) photos of Bromo as well. 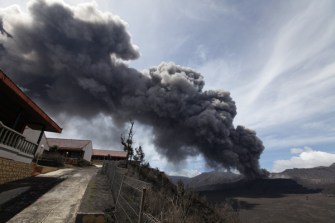 Plenty of stunning shots out there this week!

{Thank you to all who sent me images/links for this post!}

Top left: Spatter from the vents in the lava lake at Nyiragongo, taken June 2010. Click here to see the original.

De-extinction, if it is ever possible, will not be simple.
Up Next
Technology & Innovation

The ego is the part of us that loves power. It is the part that loves to be seen, recognized, praised, and adored. Facebook provides a powerful platform for this.