Attention, Space Cadets: Do Not Proposition Women in the Elevator 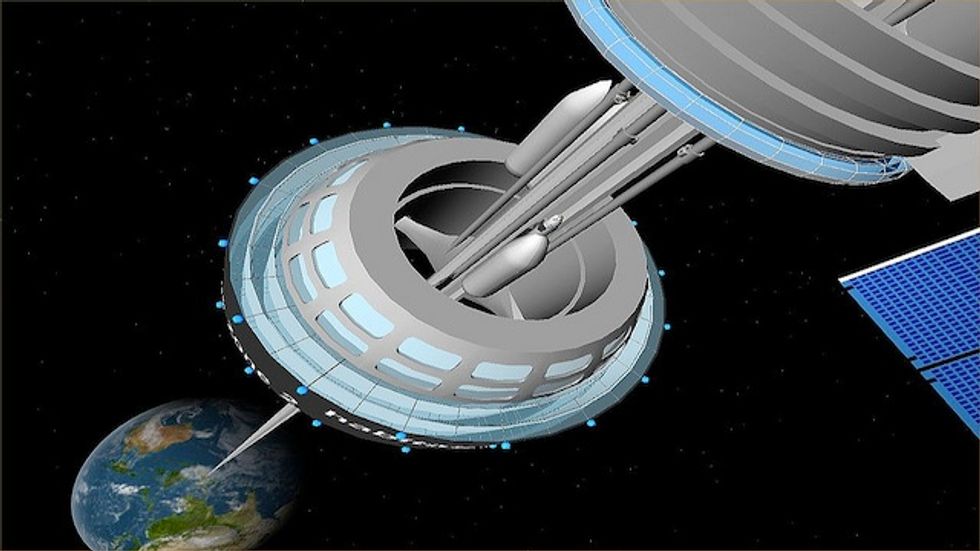 In a recent vlog, Skepchick Rebecca Watson had some friendly advice for male skeptics seeking to make women feel comfortable and welcome at skeptical gatherings. She mentioned, offhandedly, that during a recent conference in Dublin, a guy followed her into the elevator at 4:00am and invited her back to his room for coffee. His overture was not well received:

Um, just a word to wise here, guys, uh, don't do that. You know, I don't really know how else to explain how this makes me incredibly uncomfortable, but I'll just sort of lay it out that I was a single woman, you know, in a foreign country, at 4:00 am, in a hotel elevator, with you, just you, and -- don't invite me back to your hotel room right after I finish talking about how it creeps me out and makes me uncomfortable when men sexualize me in that manner.

Judging by the reaction in some quarters of the skeptical blogosphere, you'd think she'd recommended preemptive castration.

Some male skeptics huffed and puffed that they had the right to approach women anywhere they damn well pleased.

Prominent skeptic Richard Dawkins opined that Watson had nothing to complain about because Muslim women suffer genital mutilation. By the same token, Western men should suck it up when they’re asked, nicely, to show some manners in the the elevator. Don’t they realize that Muslim women are being genitally mutilated?

Some of Watson’s critics argued that she was too hard on the unnamed guy. How dare she complain about his behavior? Maybe he was just socially awkward, they said. Well, if so, he and his fellow well-meaning but socially awkward men should be thanking Watson. She did them all a favor.

Watson gave them a simple rule that anyone can memorize and apply: Don’t hit on women in elevators. If they didn’t know any better, they do now.

Yet, the discussion devolved into attacks on Watson and a stupid griping match about the “rights” of men to hit on women however they please, and, implicitly, the privilege of men not to care how women want to be treated. Some even argued that by demanding to be treated with respect, women were revealing themselves to be weak and fearful. You see, really strong women just grit their teeth and let creeps hit on them in elevators.

Note that creepiness does not imply bad intent, as some of Watson's critics have suggested. One can behave in a way that is unnerving to others without intending to upset them.

Any rational person should be able to understand the proscription against hitting on female strangers in elevators.

You're familiar with the concept of the elevator pitch, right, fellow nerds? That's the thirty-second pitch for your brilliant invention that you will deliver to the CEO of your company if you ever get her alone in an elevator. Ever wonder why it's called an "elevator pitch," as opposed to a "hotel lobby pitch" or a "gastro-pub pitch"? Because an elevator is an enclosed space where you might find yourself face-to-face with someone whom you wouldn't ordinarily talk to, and, at least for those few seconds, that person is your captive audience.

This only works in movies. The nerd fantasy of the elevator pitch is about as realistic as the fantasy of the nymphomanical space twins with a thing for Magic the Gathering--but that doesn’t make it any less compelling. But if you understand the appeal of the elevator pitch, you should understand why it’s inappropriate to proposition a woman in an elevator: she is your captive audience.

It is awkward. It is presumptuous. It is rude. It is also a little unnerving.

Ironically, no one hates high pressure sales tactics more than skeptics. We can't stand it when a sales associate gets in our face and uses cheap psychological tricks to try to make us buy stuff we don’t want. We take it as an insult to our intelligence. We resent it.

No one is saying that men shouldn’t flirt. On the contrary. When flirting goes well, everyone walks away with a little extra spring in their step, even if they walk away alone. Flirting is play. The point of flirting is to make the other person feel good--maybe to entice them to have sex with you, or maybe as an end in itself. Flirting is not high pressure sales.

If you want to approach a female stranger, especially when she’s alone at night, do so in a well-lit public place, preferably with other people nearby. Don't corner her. Strike up a conversation about something neutral. If you're at a conference, you should have plenty to talk about. Gradually work up to a more personal conversation.

Remember, these are women you like and admire, women whom you hope to charm and put at ease. It is in your best interest, as well as theirs, to approach them in a manner they find congenial.

Men who want to flirt with women have to realize: Women live in a state of continual vigilance about sexual safety. It’s like having a mild case of hay fever that never goes away. It’s not debilitating. You’re not weak. You’re not afraid. You just suck it up and get on with your life. It's nothing that's going to stop you from making discoveries, or climbing mountains, or falling in love. Sometimes you can almost forget about it. It doesn’t mean it’s not there, subtly sucking your energy. You learn to avoid situations that make it worse and seek out conditions that make it better.

If a female stranger is wary around you, it is not because she suspects you are a rapist, or that all men are rapists. It’s because a general level of circumspection is what vigilance requires. Don’t take it personally.

If this frustrates you, try to remember that women are blamed for lapsed vigilance. If a woman does get raped, everyone rushes to see where she let her guard down. Was she drinking? Was she alone? Was she wearing a short skirt? Did she go to a strange man’s room for coffee at 4am?

A woman must be seen to be vigilant as well as be vigilant. If she is deemed insufficiently vigilant, she will be at least partly blamed for any sexual that violence befalls her. If she’s regarded as downright reckless, that “evidence” can be used to completely exonerate her rapist. If it comes down to a he said/she said dispute over whether sex was consensual, as so many rape cases do, the dispute becomes a referendum on whether the woman seems like the sort of reckless person who would have sex with a stranger.

If a woman does go back to a strange man's hotel room at 4am, even if she only wants a coffee and conversation, she's more or less given him the power to rape her. No jury is going to believe she went up there for anything but sex. So, don't be surprised if a stranger reacts badly to that suggestion. It's on par with "Hey, wanna go sniff some glue?" Ask a stupid question, risk an annoyed response.

Vigilance isn’t just a game or an arbitrary set of social conventions. It’s imperfect insurance against being raped with impunity. Of course, seeming like a woman who could be raped with impunity is dangerous in itself, because that draws the real predators out of the woodwork.

So, guys, if you want to flirt with a woman, your job is put her at ease, not to ratchet up her anxiety level. No one disputes that “Would you like to come to my room?” is protected speech. You have the legal right to say it, even in an elevator at 4:00am.

But if you really don’t care whether your “flirting” is making a woman needlessly anxious or uncomfortable, that's creepy.