A Voyage Through the Multiverse and Higher Dimensional Hyperspace 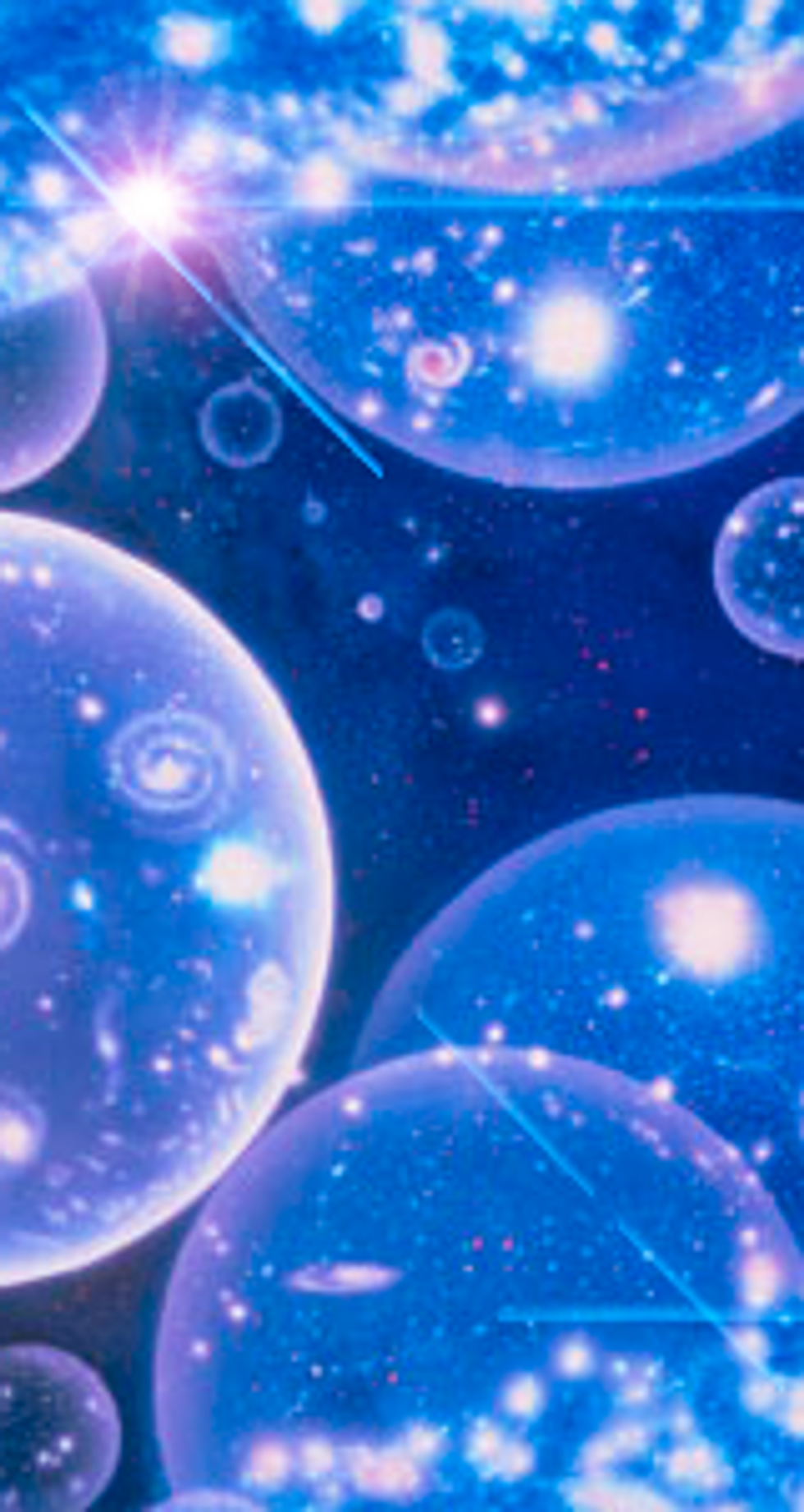 The "multiverse" idea—once thought to be so crazy it only belonged on late night television—has now become the dominant theory in all of cosmology. The idea now dominates conversations in science circles and it seems you cannot avoid the theory of the multiverse.

Einstein first gave us the idea that the universe is a soap bubble of some sort and we reside on the skin of this expanding bubble. This observation of an expanding bubble is now one of the greatest experimental achievements of the last century. Now imagine if you run the videotape backwards, the bubble would shrink and eventually become small enough to put in your coat pocket. If this "bang" happened once, it can happen again, again and again. This concept is mind boggling, that idea that entire universes are being created as you are reading this very blog entry.

When speaking about the multiverse, I’m often asked questions about the different kinds of universes that can form as a result of extra dimensions, string theory or even chaotic inflation for example. These are in some sense different kinds of universes but for me personally, it’s very aesthetically pleasing. This all goes back to my childhood with my parents being Buddhist. In Buddhism, you believe in nirvana and timelessness with no beginning and no end. As a child I went to Sunday school where I learned about arks, great floods and the instant of creation when God said, "Let there be Light". So, all my life I’ve had these two competing paradigms in my head. With the multiverse idea, we have the beautiful melding of these two ideas. The reason being is that we do have this nirvana, this timelessness, this eleven dimensional hyperspace, this arena of string theory. But we also have bubbles that form all the time, almost like a bubble bath. Sometimes the bubbles expand rapidly giving us universes, combine with other bubbles and sometimes even pop. This continual creation, the idea of a multiverse is very pleasing to me because I can now meld Buddhist nirvana with Judeo-Christian epistemology.

We have this arena of eleven-dimensional hyperspace and within it these bubbles start to expand and they vibrate. In string theory we of course have the music of strings which gives us the particles we see in nature. This is also pleasing to me because Einstein spent the last three decades of his life trying to read the mind of God and he asked himself "What are God's thoughts?" Well, believe it or not, for the first time we now have a candidate for the mind of God. The mind of God, according to this multiverse picture, is cosmic music resonating through eleven dimensional hyperspace. When I say "God," I’m talking about the God of Spinoza, not necessarily the personal God that answers prayers and feeds the sick. I’m speaking metaphorically about the God of both harmony and beauty. In other words, as I have stated time and time again, it didn’t have to be this way: our Universe could have been random, chaotic and ugly. And I find it absolutely staggering that we can summarize all the laws of physics going back 2,000 years to the Greeks on a single sheet of paper. The goal of string theory is to, of course, have it in an equation no more than an inch long. In the beginning, there was not light but rather there was the one-inch equation which then drives the gears of the entire Universe. This is the Holy Grail.

We now think that each of these universes have their own constant and their own parameters. These questions for example are for each universe: How long does the proton live? How strong is gravity? How long does the sun burn? So the question is, where is our Universe in this soap bubble of Universes? Our Universe, for instance, has stars that burn for billions of years whereas most of these universes have stars that only burn for a fraction of a second and life never gets started. We are however just now starting to get a glimpse of where we fit into this larger puzzle.

In closing, please find a snippet from Chapter 9 of my book Parallel Worlds

Parallel Universes, dimensional portals, and higher dimensions, as spectacular as they are, require airtight proof of their existence. As the astronomer Ken Croswell remarks, "Other universes can get intoxicating: you can say anything you want about them and never be proven wrong, as long as astronomers never see them." Previously, it seemed hopeless to test many of these predictions, given the primitiveness of our experimental equipment. However, recent advances in computers, lasers, and satellite technology have put many of these theories tantalizingly close to experimental verification.