It only takes $6 million to Educate the World 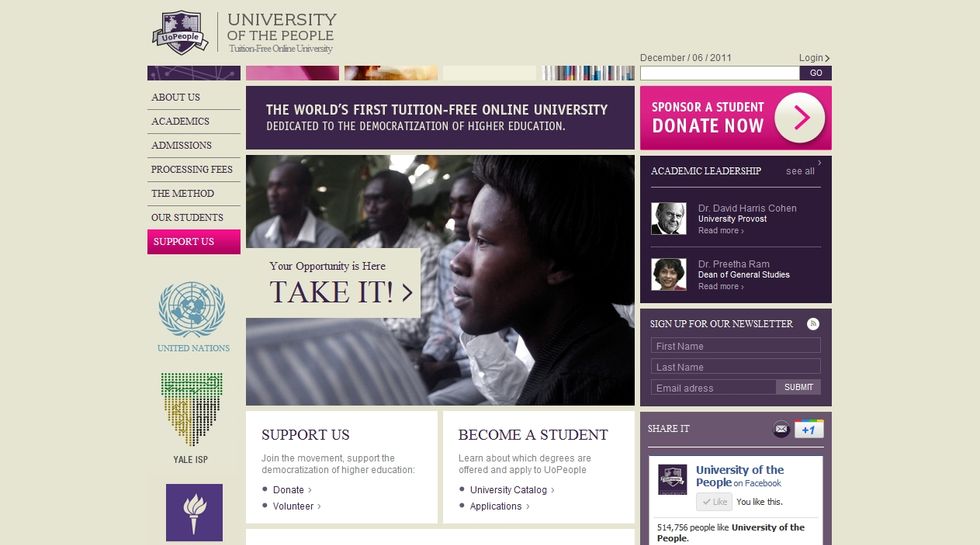 $6 million to fund an institution that would be capable to educate an infinite amount of students throughout the world sounds ambitious if not crazy.

Nevertheless Shai Reshef, founder and president of the University of the People says that those $6 million would be sufficient to enable the non-profit to reach sustainability and to fulfill its goal - forever.

In case you haven’t heard of UoPeople yet. Founded in 2009 by serial entrepreneur Shai Reshef the University of the People was the first tuition free, peer-to-peer institution based on Open Educational Resources. Students just pay a very low one time fee, $10 to $50, depending on their country of residence.

Currently UoPeople has accepted more than 1200 students from 120 countries. Some of these students are living in refugee camps where partners of the UoPeople give them access to the Internet.

The foundation of UoPeople are the freely available resources, lectures and courses by institutions like the MIT, Stanford or Berkeley. The problem for many students is of course to either find those courses or if the did to then to motivate themselves and learn on their own.

To overcome this challenge over 2000 academics are screening the material available, modify and enhance it and offer the necessary tutoring besides the peer-to-peer learning.

The other problem for self learners is the lack of credentials. I talked about this already when explaining the Knowledge Graph. UoPeople adds the necessary credentials with a classic grading system that leads to undergraduate degrees at the end of the studies.

Hence, the costs of running UoPeople or other institutions based on the same or similar model are very low. There are no costs for the material and all course designers and instructors are volunteers. This leaves administrative and infrastructural costs to keep the platform running.

Since its launch, UoPeople has attracted support from both academia and big corporations. Leaders from Oxford, Harvard and Columbia University joined the faculty and it partnered with Yale University for research, New York University for transfer students and Hewlett-Packard for internships.

Coming back to the $6 million, UoPeople also gives us some numbers in comparison:

It’s also about half the money Khan Academy has received up to now, which should be around $11 million if I am not mistaken.

I have been a supporter of Shai and UoPeople since the beginning as he and his team are not trying to reinvent the wheel or compete with existing institutions. Their idea of revolutionizing higher education is not to overthrow it but making it more accessible.

If you want to learn more about Shai and his background in education, I had the pleasure to interview him for EDUKWEST back in February. We also talked about his track record as chairman of Kidum, KIT and Cramster.