Imagine reading by plant light, and glow-in-the-dark trees instead of street lamps. That's on the horizon thanks to these engineers. 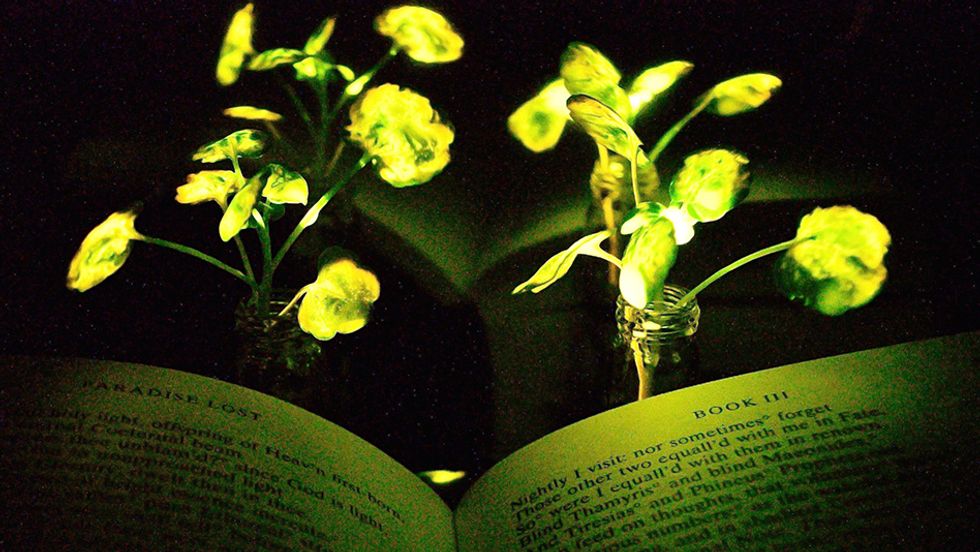 New research funded by the U.S. Department of Energy may produce plants that will eventually be able to provide enough light to replace street lamps. This could lead to serious energy savings given the fact that lighting currently accounts for about 20% of worldwide energy consumption.

So far, the researchers have managed to produce kale, arugula, spinach and watercress that can glow for almost four hours. Michael Strano, the Carbon P. Dubbs Professor of Chemical Engineering at MIT and senior author of the study says:

“The vision is to make a plant that will function as a desk lamp—a lamp that you don't have to plug in. The light is ultimately powered by the energy metabolism of the plant itself."

The scientists used three separate molecules and packaged them in different nanoparticle carriers that deliver them to the appropriate part of the plant. The reaction that produces the light requires an enzyme called luciferase (which is found in fireflies) that acts on a molecule called liciferin. Another molecule called co-enzyme A helps the process along by removing a reaction byproduct.

This approach is much more efficient and less laborious compared to past attempts to design glowing plants based on genetically engineering them to produce the chemical reaction. The new method requires simply soaking the leaves in liquid and thus can be applied to various types of plants. Imagine streetlights replaced by glowing trees or being able to quickly turn the nearby anthurium into a desk lamp.

This is not the first time MIT has been tinkering with plants. As Strano says, “Plants can self-repair, they have their own energy, and they are already adapted to the outdoor environment," which makes them great for experimentation with nanobionics. In the past his lab has designed plants that can detect explosives, as well as plants that can monitor drought conditions.

Currently, the light emitted from the plants is about a thousandth of the level required to read by, but the scientists are looking forward to further optimizing their technology. For the future versions they hope to make the light much brighter and to also develop a way to spray the nanoparticles onto plant leaves.

“Our target is to perform one treatment when the plant is a seedling or a mature plant, and have it last for the lifetime of the plant," Strano says. “Our work very seriously opens up the doorway to streetlamps that are nothing but treated trees, and to indirect lighting around homes."

Another feature the researchers have already demonstrated is turning the light off by introducing a fourth molecule. This could eventually create plants that can shut off their light in response to an outside stimulus like sunlight.

Plant lamps could also have a huge impact on education in developing nations, as technology entrepreneur Vivek Wadhwa explains:

"When people in remote parts of India, Africa, South America come home, they can't study because they don't have light. This is something we can't comprehend in America: that you don't have light, you can't study, therefore children don't get education. But this is a common problem in the developing world."

Watch Vivek Wadhwa's take on life in 2027 below: