Why Do Atheists Gather? 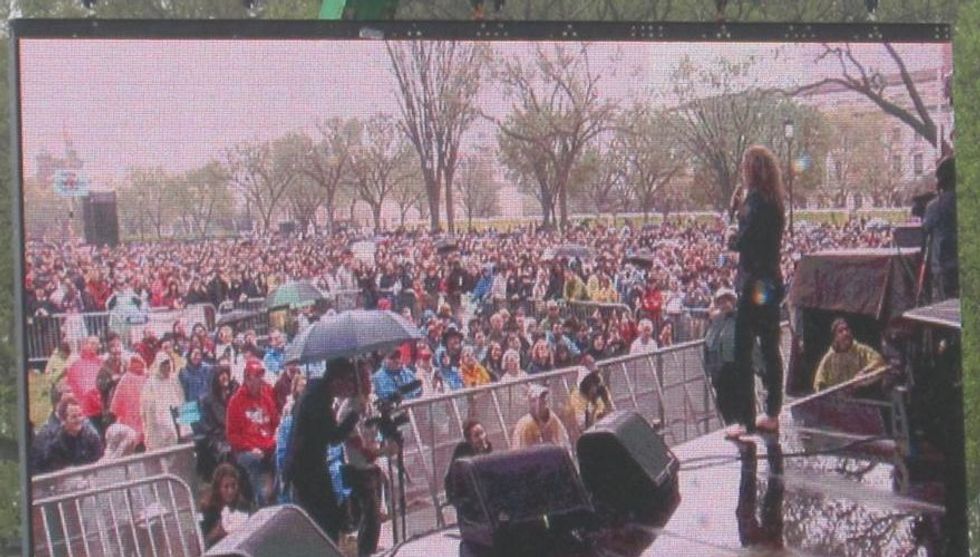 In the first of my posts summing up the Reason Rally, there was a commenter who said that gathering on the National Mall was "sink[ing] to the level of the religious". At the time, I considered this too self-evidently absurd to merit refutation - but then I heard it again, in an NPR interview featuring Hemant Mehta and James Randi, where a caller charged that that we were "turning atheism into a religion" by gathering in this way. Since this confusion seems to be more widespread than I thought, I decided to address it.

The obvious rejoinder: To qualify as a religion, it takes a lot more than people of like mind all gathering in the same geographic area. If that was all that was required, every stadium and sports arena would become a holy place each weekend. And that's not even mentioning the political rallies, parades, conventions and marches that take place around the world. (Does the St. Patrick's Day Parade make "Irishness" a religion? I won't even ask about the Star Trek or Harry Potter-themed conventions.) Having some common interests and desires isn't enough to form a religion. Being a religion requires a creed, official dogmas or texts, an ecclesiastical hierarchy, an insistence on ideological conformity, even just a bare belief in the supernatural - none of which we have.

There were three main purposes that I saw in the Reason Rally, all of them secular. First, the St. Patrick's Day example hints at the broader truth, which is that people gathering together do so as a way of affirming a common identity. The foremost purpose of a rally like this is to say to the world, "We're here, we exist, and we take pride in who we are." (Or as Fred Edwords put it from the stage, "We're here, we're godless, get used to it!") As an embattled minority that's frequently the target of prejudice, atheists benefit when we make our existence known to wider society. It shows the world that we're real people, and more to the point, that we're good citizens - friends, family, neighbors, coworkers - rather than an amorphous shadow onto which fundamentalists can project their worst stereotypes.

The second purpose of the Rally, of course, is for political mobilization. It's all well and good for ivory-tower dwellers to proclaim that we should just calmly debate theology in a dispassionate realm of ideas, but there's a real world outside their windows, a world where laws inspired by religion - laws that define the contours of free speech, laws restricting access to abortion or birth control, laws governing the equal protection of gay people, laws dictating what's taught in public schools, laws that allow publicly funded charities to discriminate on the basis of religion - have real impacts on the lives of millions of people. In a democracy where public policy is shaped by elections, the side that spends the most money, goes to the most effort, and wears out the most shoe leather promoting their ideas usually wins.

The Constitutional guarantee of secularism offers some protection against crusading religious majorities seeking to impose their will, but we can't just assume that the Bill of Rights will protect us every time, particularly if we don't go to any effort to defend it in turn. If we want to preserve the freedoms we cherish, we have to fight for them, and we intend to fight for them. The Reason Rally was partly an effort to motivate atheists to mobilize and unite to support the causes that matter to us. I more than half-suspect that the people trying to discourage this are religious concern trolls trying to keep us isolated and divided and prevent us from engaging in concerted political action.

And lastly, the Reason Rally and other atheist gatherings help to encourage social connection. Particularly for those living in heavily religious communities, life as an atheist can be difficult and lonely. Big gatherings are a safe space for nonbelievers: a place where we're among friends, where we can open up and speak our minds, and where we can take part in enlivening conversations with fellow freethinkers rather than rehashing the same debates over and over with the religious. For people who don't have this opportunity in their everyday life, this is both a joy and a relief. As another of the callers on the NPR program put it, "I just wanted to say how exhilarating it was to me personally... I was [at the rally] and suddenly, I was not alone!"

Even for people who don't live in ultra-religious regions of the country, the Reason Rally was an opportunity to connect with our fellow nonbelievers, to bask in that human contact that no online communication can ever fully replace. For me, part of the reason that I went was to see some of my friends in the secular movement who I only see a few times a year - usually at conventions like these - as well as to meet some awesome new people whom I'd never met in person before. I can personally testify that enjoying the company of one's fellow atheists in the flesh, swapping ideas and fellowship, is fantastic quantities of fun and always leaves me charged with happiness and positive energy. If you've never done this, it's an experience not to be missed.