One of the effects of the President-elect running on a platform with… ahem, questionable racial ideas is that the extreme racists in our society are emboldened, like those in the Alt-Right sphere, which is defined by the Southern Poverty Law Center (SPLC) as:

“The Alternative Right, commonly known as the Alt-Right, is a set of far-right ideologies, groups and individuals whose core belief is that ‘white identity is under attack by multicultural forces using ‘political correctness’ and ‘social justice’ to undermine white people and ‘their’ civilization. Characterized by heavy use of social media and online memes, Alt-Righters eschew ‘establishment’ conservatism, skew young, and embrace white ethno-nationalism as a fundamental value.”

It has been argued that it’s the core support for Donald Trump’s entire campaign.

In an effort to illustrate how much of this is out there on the Innerwebz, the Anti-Defamation league maintains a database of hate symbols called “Hate on Display” — including those that are pretty much only seen on the web.

In the past few months, two symbols used on Twitter, Facebook, and other social media channels made it into this … hall of fame.

The first is the (((echo))) symbol, used by racists on Twitter and Facebook to identify what they call “Jewish controlled institutions” or Jewish users, frequently tied to comments and articles about Donald Trump. For example, writing (((banker))) to imply that the word “Jewish” should be added to it.

The second one added to the database recently? Pepe the Frog, a.k.a. Sad Frog. 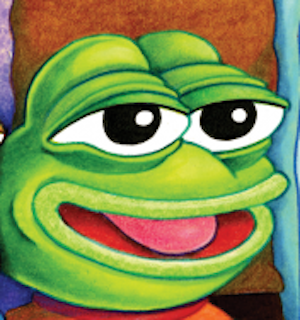 The Pepe meme/image didn’t start off as a hate symbol — it was created by artist Matt Furie in a 2005 cartoon called “Boys Club,” but made it this year because it’s been used with various racist modifications. Here are just a few of the less-offensive ones: 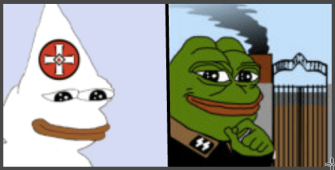 Not all versions of Pepe are racist, but enough variations have appeared to make it into the database.

And for a pretty comprehensive roll call of hate groups, take a look at Southern Poverty Law Center’s extensive list.

Jokesters and serious Area 51 raiders would be met with military force.
Up Next
Neuropsych

How Having a Happy Spouse Can Improve Your Health

Forget multi-vitamins, pick up a happy spouse instead. This study suggests the enormous upward effect of having a partner who has a happy nature.