At the beginning of this year, Finland has decided to give its citizens free money. No strings attached. No questions asked.

As part of the “universal basic income” (UBI) scheme, 2,000 unemployed citizens aged between 25 and 58 were randomly selected to receive cash payments of €560 (almost $640) every month, for two years.

Finland is trying to see if the UBI could replace the traditional system of social benefits.

Unlike regular social security, those receiving the basic income don’t need to prove to anyone that they’re actively looking for a job, nor do they stop receiving the money if they do get work. There are no monthly check-ins at the local job center and no obligation to accept a job that the center has found for you.

Kela, Finland’s social security institution, hopes that the UBI will achieve three main things: put an end to poverty, tackle unemployment, and cut down on the bureaucracy.

The Finnish government wants to encourage people to find work they really want to do, and even start their own business. Since the UBI is unconditional, participants don’t have to worry about losing the money if they take on work or set up their own business. 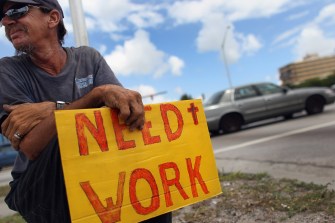 Stephen Greene works a street corner hoping to land a job as a laborer or carpenter on June 3, 2011 in Pompano Beach, Florida. Photo by Joe Raedle/Getty Images

The UBI will also hopefully help simplify the social security system. In an interview with The Guardian, Marjuka Turunen, Head of Legal Affairs Unit for Kela, describes the many flaws of this system as it is:

“If you have a part-time job you have to apply for your benefit every four weeks (…) You might have lots of different employers, and you’ll need to wait to get payslips from all of them. Then it takes another one or two weeks to process your payment. You don’t know how much you’ll get and when, which means you can’t plan ahead.”

Kela also hope the UBI will help address “the changing nature of work.” This doesn’t refer only to the increasing prevalence of part-time work, but also to… robots! Some have argued that soon our jobs will be completely taken over by computers – in which case, we’ll have to come up with new ways to support ourselves financially.

A report from the University of Oxford indicates that “over the next decades” almost half (47 percent) of jobs in the United States will be at “high risk” of becoming obsolete due to computerization. Artificial intelligence may soon take over jobs as diverse as supermarket stockists, taxi drivers, and journalists.

Is it going to work?

Some say that the experiment has already resulted in lower stress levels for those included in the experiment – and no wonder! Not having to worry about where your next paycheck is coming from would sure take a load off of anyone’s back.

But naysayers argue that in the long run, the UBI will make people work less, not more. For one thing, having an unconditional income could make people lazy.

For another, the country’s biggest trade union thinks it will encourage companies to pay its workers less, as large corporations will take into account the monthly income. Not only that, but the left also fears that the right will use the UBI to challenge minimum wage requirements.

For now, we simply can’t tell what will happen – but finding out is what this experiment is all about. Kela have made it clear that they’ll keep us all in suspense until the very last minute, as it won’t reveal any of the results before the experiment is over (i.e. 31 December 2018) and the data have been thoroughly analyzed.

Anxieties about being identified will be superseded by fears of being analyzed.
Up Next
Health