More than 80% of people living in urban areas that monitor air pollution are exposed to air quality levels that exceed the World Health Organization (WHO) limits. It gets even worse if you look at low and middle-income countries, where 98% of cities don’t meet WHO guidelines.

Inspired by this statistic as well as by many trips to smog-filled Beijing, in 2013 Dutch artist and innovator Daan Roosegaarde and his team began the creation of the Smog Free Tower – the largest air purifier in the world.

The Smog Free Tower is 7 meters (23 feet) high and according to Roosegaarde can clean 30,000 m3 per hour via patented ozone-free ion technology and a small amount of green electricity. The Tower is supposed to capture more than 75% of the PM2.5 and PM10 (particulate matter that can easily go into your lungs and was recently classified as Group I carcinogen) and release clean air around the tower with a 360-degree coverage creating an almost circular zone of clean air in its surrounding.

In order to close the waste cycle completely, the collected particles are treated under high pressure to produce Smog Free Jewellery such as rings, the sale of which supports the creation of more towers. 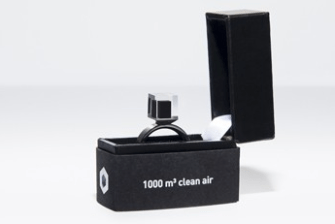 After piloting in Rotterdam, The Smog Free Tower opened in Beijing on September 29th, 2016 with the support of the Chinese Ministry of Environmental Protection.

All China Tech reports that according to the China Forum of Environmental Journalists, during the first 50 plus days of operation, the tower did show some signs of purifying the air of Particulate Matter 2.5 (PM2.5), but the effect was unstable and the effective range was very much limited to its immediate surroundings. The tests done in November show that, within 5 meters of the tower, the PM 2.5 concentration is 89 micrograms per cubic meter, while WHO recommends a maximum of 25 micrograms.

Even though Roosegaarde still claims the tower is effective, he doesn’t believe it is a solution to urban air pollution, but envisions it mostly as a project that raises awareness and inspires designers, non-profit leaders and policy-makers to think of more solutions to the air-pollution problem. The Smog Free Project is a part of Roosegaarde’s larger body of work ‘Landscapes of the Future’ which connects people, technology and space to improve the quality of daily life in urban environments.

Why measuring antimatter is the key to our Universe

The galaxy cluster MACSJ0717.5+3745, must be made of matter just like we are, or there would be evidence of matter-antimatter annihilation along the line of sight. Image credit: NASA, ESA […]