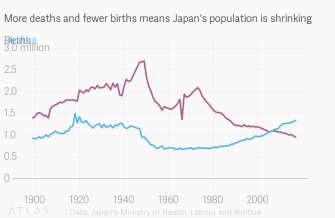 As outlined in Quartz, Japan is made up of “aging baby boomers and young adults who don’t want to have kids.”

The median age in Japan also skews to older folks, and Japan is at the top of the list of countries by median age, at 46.3 years old. This will get even higher as fewer children are born there.

The precipitous decline is directly tied to birth rates; the average Japanese woman had 2.07 kids in the 1970s, and that’s now at 1.43.

Why? Quite simply, Japanese adults don’t want to have children. 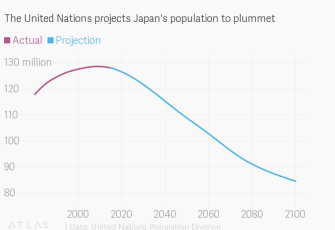 Some of the social costs of this decline:

In an excerpt from her recent book, the behavior geneticist Kathryn Paige Harden carefully explores a topic that's often considered taboo: how genetics affect life outcomes.
Starts With A Bang

The universe is filled with unlikely events, but is also full of ways to fool ourselves.
Up Next
Technology & Innovation

Apple's privacy controls just got a big boost with iOS 12.