The last time we were talking about pop lyrics, Beyoncé had just lost the Grammy for best album to Beck and Kanye West had interrupted yet another acceptance speech. Facebook was posting a side-by-side comparison of the nominees’ lyrics (although that’s just one measure of best album, as the The Guardian pointed out, ultimately giving the nod to Queen Bey). 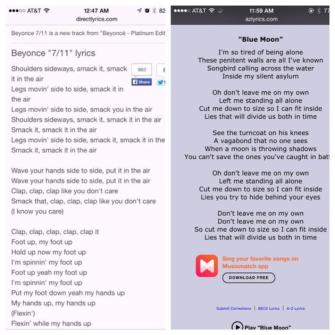 The simplicity of Beyoncé’s lyrics is not unique. In fact, a great many of our most popular songs are written at just a third-grade reading level. That’s the conclusion reached by an analysis of 225 songs that spent at least three weeks at the top of the Billboard charts over the last 10 years.

The analysis used the Readability Index to rank songs according to the complexity and diversity of their lyrics. At present, this post has a reading level of just above seventh grade, so despite my grad school pedigree, I’m apparently more at home with middle schoolers.

Perhaps more surprisingly when it came to song lyrics, country music pulled the other genres to above a third-grade level, averaging a 3.3 reading level while pop and rock tied at 2.9 and R&B/hip-hop ranked lowest at a grade level of 2.6.

In 2007, rock and R&B/hip-hop both plunged with the help of songs like “Buy U a Drank” by T-Pain (which just made it above a first-grade reading level) and“I Don’t Wanna Stop”by Ozzy Osbourne (a more respectable 1.6 average grade level).

Maybe it was the financial crash of 2007 that made T-Pain and friends need a drank? Then again, maybe not. Since 2005, the intelligence level of lyrics has steadily declined, moving from a high of about 3.5 in 2006 to its present low of about 2.7.

When five-time Grammy-winning artist Mary Chapin Carpenter stopped by Big Think, she explained the danger in branding country music, or artists generally from the south, as being less sophisticated.

Some scientists see religion as a threat to the scientific method that should be resisted. But faith “is really asking a different set of questions,” says Collins.
▸
5 min
—
with
Francis Collins
Starts With A Bang

How hot are the hottest stars in the Universe?

At their cores, stars can reach many millions or even billions of degrees. But even that doesn’t touch the hottest of all.
Up Next
Technology & Innovation

Do We Need To Rescue Rationality?

The word “rational” needs to be rescued. Tom Stoppard’s new play shows that a major rational parable, the Prisoner’s Dilemma, is widely misinterpreted. Seeing why “rationalists” do worse than Christians can help us avoid losing in evolution’s “negative telos” games.