Moms who take care of the kids are working basically 2.5 jobs—for free.

And it must be said: stay-at-home dads are not excluded. The survey gauges the amount of time spent in some aspect of both child care and housework, including making food for the tribe. 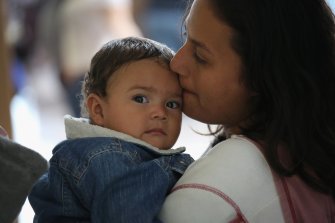 2,000 American moms of children aged five to 12 were surveyed for this study by the company Welch’s. Some of the results:

– 4-in-10 moms felt like their lives were a never-ending series of tasks, every day of the week

That adds up to a 14-hour shift, every day of the week.

Not surprisingly, coffee, wine, naps, and the ability to quickly adopt an angry voice were some of the things they couldn’t live without. Family helping out or and other trustworthy babysitter help also topped the list.

“When it comes to making decisions around a family’s diet and overall nutrition the burden often lands with Mom who, as the survey shows, has very little time to spare. The ability to offer a quick snack or beverage that she can be reassured is nutritious for the whole family is something that can’t be underestimated in making a difference to her day.” says Casey Lewis, MS, RD and Health & Nutrition Lead at Welch’s.

According to the UN, unpaid work is a crucial support for insufficient social services and bolsters the economy. Its value is estimated to be between 10 and 39 percent of a nation’s GDP. 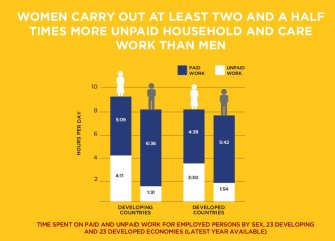 Related
Starts With A Bang
Ask Ethan: Do my atoms really “touch” each other?
When you bring two fingers together, you can feel them “touch” each other. But are your atoms really touching, and if so, how?
13.8
Why the origin of life and the Universe itself might be forever unknowable
There might be a hard limit to our knowledge of the Universe.
Hard Science
200 years of exploring Antarctica
What we’ve learning from the world’s coldest, most forbidding, and most peaceful continent.
Sponsored
4 misleading personal finance tips
Personal finance advice is often over-simplified and fails to consider economic research or people’s unique circumstances.
Strange Maps
Europe’s stunning digital divide, in one map
Some Europeans really don’t want to use the internet.
Up Next
Politics & Current Affairs
What men would do to fix the workplace equality gap
It is still true that far more men than women have leading roles in many organisations.