If you’ve ever had to talk with your kid about McDonald’s food, you know how the conversation goes. I’ll give you what ours looks like:

Dad: Welp, kiddo, it might taste great, but it’s not good for you. At all.

Kid: How can it not be good for you?

Dad: Anyway, let’s go home and I’ll make something that tastes much better — and is better for us.

(If your kid is old enough to surf, have them check out this link, “5 Reasons to Never Let Your Kids Eat McDonald’s.” Oh, and the ever-frightening, “World’s Oldest Hamburger From 1999 Almost Looks New.” 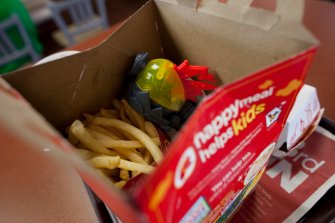 San Francisco Votes To Ban McDonalds Happy Meals SAN FRANCISCO, CA – NOVEMBER 03: A photo illustration of a Happy Meal at McDonald’s on November 3, 2010 in San Francisco, California. San Francisco became the first city in the nation to pass a law to control giving away free toys with unhealthy meals for children. The law requires that any restaurant kid’s meals meet nutritional standards before they can be sold with toys. (Photo by David Paul Morris/Getty Images)

On the rare occasions we acquiesce and actually let them get McD’s, we are frequently asked if they can get a “Happy Meal.” We nearly always say “No” to Happy Meal requests, because the addition of a cheap Chinese-made plastic toy is not worth the extra few bucks to us. (Pro tip: You can buy those toys for a buck or two at the counter where others are ordering food. You’re welcome!)

Enter McDonald’s 2018. The company is changing up the “Happy Meal” line to reduce calories, sugar, and fat. It’s also, later this year, adding the option of a book instead of a cheap plastic toy.

The primary ways it’s reducing the stuff that makes us obese? Removing cheeseburgers from the meals (though they’re still an add-on option), halving the fry portion, lowering the amount of sugar in its chocolate milk, and attempting to get calories — on all Happy Meals — below 600.

Any bets on whether the price will come down, given the smaller portions? Anyone? Anyone? Bueller?

It’s an interesting marketing strategy, and one that’s been tried before. In 2014, Burger King tried, and then quickly dropped, a reduced-calorie fry option.

Also, shooting for more of a Millennial customer base, Taco Bell eliminated special kids’ meals in 2013. McDonald’s steadfastly holds on to the Happy Meal approach to marketing to kids, however, despite the fact that it’s losing out to pizza and “Mexican” food when kids grow up.

So … do you want (a half-sized portion of low-salt) fries with that?

Related
Thinking
“Give a f***, actually”: The surprising benefits of being grateful for things you dislike
Radical Emotional Acceptance calls on you to celebrate all of life’s emotions — even the negative ones.
Thinking
Visual thinking: How to comprehend animal consciousness
Humans are good visual thinkers, too, but we tend to privilege verbal thinking.
Strange Maps
The world’s longest straight line connects Portugal to China
It’s nearly 20,000 miles long.
The Well
This is what the fourth dimension looks like
Left–Right, Back–Forth, Up–Down. What’s the fourth dimension?
▸
3 min
—
with
Brian Greene
The Past
How the death of alchemy gave birth to modern science
Far from practicing witchcraft, the experimentation of medieval alchemists helped bring about the Scientific Revolution.
Up Next
Politics & Current Affairs
There’s one way to stop school shootings without taking away anyone’s guns
One achievable solution can stop the epidemic of school shootings in the United States without restricting the guns of law-abiding citizens.