When whistleblower Edward Snowden encrypted a file containing evidence of mass surveillance by the National Security Agency of the U.S. Government, he titled it “Astro Noise,” the name scientists give to the faint traces of thermal radiation left over from the “Big Bang” that gave birth to the universe.  Snowden entrusted that explosive file to journalist Glenn Greenwald and filmmaker-artist Laura Poitras, who turned it into the film Citizenfour.  Poitras (shown accepting an award “with” Snowden above) now makes more noise with the exhibit Laura Poitras: Astro Noise in hopes of giving Americans a visual survival guide for living under total surveillance.

Poitras’ association with Snowden through Citizenfour (whose trailer appears above) catapulted her into the spotlight, but she stirred up trouble for the powerful long before that.  She made My Country, My Country in 2006 to educated Americans about living conditions for Iraqis under U.S. occupation post-Saddam and earned an Oscar nomination.  In 2010, Poitras told the story of Abu Jandal and Salim Ahmed Hamdan, two Yemini men entangled in the American legal system as part of the War on Terror, in her film The Oath.  Snowden wasn’t even Poitras’ first government whistleblower.  When 32-year NSA employee William Binney disclosed details of the Stellar Wind program he helped design in 2012, Poitras was there to listen and turn it into a film.  Such work led Snowden to choose Poitras when looking for an outlet for his revelations in 2014.  For her efforts, Poitras found herself monitored, searched, detained, and interrogated by the U.S. Government—an achievement she still wears as a badge of honor in the fight for full transparency of government activities. 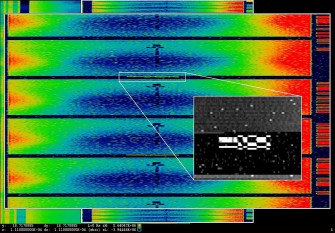 After all that success with film, why does Poitras turn to art to tell this story?  Quite simply, the issue of government surveillance remains a complex story that most Americans understand poorly, if at all.  As Snowden himself has found, it’s frustratingly hard to describe such a complicated web of programs and technologies to a society conditioned to digest sound bites.  Comedian John Oliver tried to help Snowden explain the issue in a hilarious interview and strained to make the issue relatable (specifically by referring repeatedly to “dick pics”), but it remained devilishly difficult to comprehend. Rather than humor, Poitras tries to take the realities of surveillance and make them relatable as visual experiences.  “I very much like the idea of creating a space that challenges the viewer and asks them to make decisions,” Poitras explains. “My films are about these questions—what do people do when confronted with choices and risks?”  Rather than just show footage of a drone, Poitras “ask[s] people to lie down and gaze upward in Bed Down Location, for example,… to enter an empathetic space to imagine drone warfare.”  Images such as ANARCHIST: Israeli Drone Feed (Intercepted February 24, 2009) (shown above) make you feel viscerally the reality of drone attacks in a way that news stories and interviews cannot. 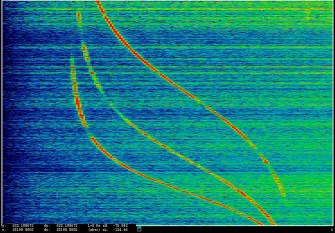 On one hand, Poitras wants you to feel and understand issues of surveillance more clearly.  On the other hand, Poitras wants you to feel and understand just how deliberately disorienting the issue is as well.  “In another piece,” Poitras says, “there is both the seduction of shafts of light to look into, but also the choreography of bodies in the space, bodies facing walls and the things you associate with that, like firing squads. I’m interested in making things hard to see, just like the deep state is hard to see.”  If you have trouble seeing the point, that’s the point Poitras is making.  Looking at images such as ANARCHIST: Data Feed with Doppler Tracks from a Satellite (Intercepted May 27, 2009) (shown above) might be frustrating for those looking for answers, but it should motivate you to understand this real life-or-death issue that literally hangs over us all, whether we acknowledge it or not.

Poitras subtitles the catalogue to the exhibition “A Survival Guide for Living Under Total Surveillance” (excerpts from which can be seen here). The catalogue collects “responses to the modern-day state of mass surveillance and the ‘war on terror’ from a diverse group of artists, novelists, technologists, graphic storytellers, and data journalists, among others,” including Poitras, Snowden, artist Ai Weiwei, and author Dave Eggers.   Even if you can’t get to see Laura Poitras: Astro Noise in person, you should look for your own “survival guide” to the age of surveillance and the possible death of privacy.  Before you come down on one side or the other of the Apple versus FBI debate over iPhone security, for example, let Laura Poitras (shown above, filming the NSA Utah Data Repository being built in 2011) help you cut through all the distracting noise to hear and judge the facts clearly for yourself.

Here’s what the weather phenomenon baking large parts of the country actually means.
Up Next
Technology & Innovation

Online voting will transform our political process.  It will improve turnout and make the U.S. a more democratic society.