Our Lady of Lourdes appears 18 times to a miller’s daughter collecting firewood in a small market town in France. A young woman leads an army through critical strategic victories in the 100 Years’ War, claiming to be guided by divine insight. In the very first hours of the 20th century, a student asks God to fill her with the holy spirit and begins to speak in tongues.

Are these incidents case studies in undiagnosed mental illness, spiritual transcendence, or something nebulously in between?

Watch our interiew with Dr. Andrew Newberg, a pioneer in the field of neurotheology:

It’s an interesting and elusive question for neuroscientists, with big implications on our understanding of consciousness. As the Nobel-prize winning neuropsychiatrist Eric Kandel has said, reductionism — the idea that a system is nothing more than the interactions between its parts — is an extremely successful theory of biology, but as a “theory of everything,” it fails to provide us with a sufficient explanation of a few basic, fundamental elements that shape human perception.

Particularly, religion. Why do we care whether or not God exists? And why do so many people believe? A new generation of neuroscientists is addressing those questions directly, with the ambitious goal of measuring what happens to the human brain during spiritual experiences. Dr. Andrew Newberg is the Director of Research at the Myrna Brind Center for Integrative Medicine and a pioneer in the field of neurotheology. Newberg doesn’t identify with a particular religious group, but he’s fascinated by the profound significance and persistence of human faith throughout history.

To measure the effects of trance states and ritual on the brain, he uses a technique called single photon emission computed tomography, in which subjects are injected with a chemical that emits gamma rays. A computer collects the information transmitted by the rays and constructs from it an image of the brain depicting blood flow to the various regions. The more blood flow to a particular region, the more brain activity. Using this method, Newberg has studied the brains of Franciscan nuns during prayer, Tibetan monks during meditation, and Pentecostals speaking in tongues.

What he’s found is surprising: religious feeling is not invisible. The common thread among mystical and spiritual practices is that while people are engaged in them, the lobes of their brain can be seen working together to create a powerful emotional experience. “When we looked at [subjects’] brain scans, instead of the frontal lobes going up, the frontal lobes actually went down [in blood flow]. Which makes sense in the context of what they are describing is happening to them,” Newberg explains. “They don’t feel that they’re purposely making it [happen]. They feel that they are being basically overcome by the experience.”

He believes that what subjects describe as their interaction with God is a shutting down of their concentrative, willful attention in order to allow this experience of transcendence to happen. “For them it’s the spirit of God which is moving through them. I can’t prove that or disprove that on the basis of a brain scan, but I can see the changes that are going on in the brain while they’re engaged in this very, very powerful and very deep spiritual practice… It certainly looks like the way the brain is put together makes it very easy for human beings to have religious and spiritual experiences.”

The question, then, is not whether we’re wired for what we’ve come to call spiritual experiences exist, but how a tendency towards the transcendent makes us better adapted to live and survive in the world around us. What is the evolutionary purpose of belief?

A hint lies in the fact that it’s likely the repetition rather than the content of a ritual that makes it effective. It doesn’t seem to matter whether a person chants or recites a verse or thinks a specific thought; a transcendent or meditative state is achieved through practice, strengthening connections in the brain around a particular idea or task. Religious practices may in fact be useful in a secular context. Whatever they mean to you, there’s evidence that simple rituals like breathing deeply when you’re stressed can improve your mental health and help you cope with the world, even if you’re skeptical about whether there’s a divine plan behind it. 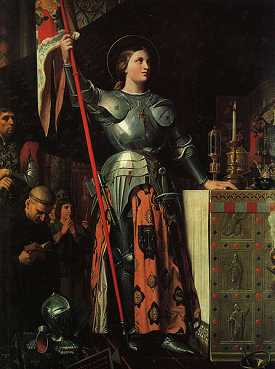 Joan of Arc lifted the Siege of Orléans in just nine days.

Bernadette Soubirous was living in a one-room basement when she saw her first vision of an illuminated woman, which she referred to as “acquero” meaning “that.”

Related
The Learning Curve
Why do high IQ people stagnate in their careers? Emotional intelligence
Research suggests that emotional intelligence is more vital for success than IQ.
The Present
Even in the age of AI, some problems are just too difficult for computers
Computers are growing more powerful and more capable, but everything has limits
The Future
How the metaverse will revolutionize K-12 and higher education
Imagine going on a tour through the human circulatory system as a tiny cell. That is just one example of education in the metaverse.
Starts With A Bang
Ask Ethan: What are white holes, and do they really exist?
In General Relativity, white holes are just as mathematically plausible as black holes. Black holes are real; what about white holes?
Life
Strange life forms create an “alien” ecosystem in an abandoned uranium mine
Slimy biofilms made up of bacterial and eukaryotic life forms have taken over an abandoned, flooded uranium mine in Germany.
Up Next
Culture & Religion
Creativity in the Cloud: From the Big Bang to Twitter
What’s the Big Idea?What does it mean to be connected in the 21st century? Hope, interdependence, and possibly the creation of a new consciousness, says Tiffany Shlain. Shlain is the founder […]