Many were shocked recently to see articles splashed across the internet foretelling the end of the beloved honeybee, which was supposedly listed for the first time on the endangered species list. This turned out to be a misconception. These familiar pollinators are doing fine. It’s a specific kind of bee that’s listed, native only to Hawaii. Even though bee colonies are on the mend from a mysterious condition known as “colony collapse disorder,” the phenomenon allows us to recognize just how important bees really are.

Honey bee pollination today is worth $15 billion to the US economy. Strawberries, coffee, avocados, and many, many other foods would be wiped off the Earth. As a result, humanity would not survive without these dutiful insects. One-third of our food supply comes from crops pollinated by bees.

Due to their essential nature and the fact that robotics has come so far in the last several years, the National Science Foundation (NSF) recently tasked roboticists with a challenge, create a type of tiny robot that can sustain flight independently, communicate with its brethren, pollinate crops, and provide communications in rural areas.

These micro-robots could be used in agriculture as well as disaster relief. Harvard scientists along with colleagues at Northeastern University, supported by the NSF, rose to the challenge. 180 days were all that were given to show results. Last year, a group of scientists at Harvard’s School of Engineering and Applied Sciences (SEAS), led by Professor Robert Wood, unveiled a group of autonomous flying micro-robots, which have been dubbed “robobees.” These robots fly, hover, and even swim. Though it can only swim in deionized water, currently. Their tiny wings really move, beating 120 times per second.

Though nicknamed robobees, its flying ability was actually modeled after an agile bird, the puffin, which uses the same wing strokes to fly and to swim. A pyramid-shaped sensor at its head controls the robot as a main nerve center, forgoing the external camera and sensor arrays used in robots past.

Recently, researchers released another video, showing that the 84-mg. robot—about the size of a real honey bee, can now adhere to walls. Electrostatic adhesive patches allow it to stick to just about any surface. This saves oodles of power which it would otherwise use to hover. Though today, these micro-robots remain wired to a power supply, this is no less an impressive feat.

The first of their kind, Harvard roboticist Kevin Ma told Business Insider that the next phase is an untethered device, which will be larger and able to carry its own power supply, a battery. Though not ready to replace worker bees just yet, researchers believe they will be able to pollenate crops in about a decade or so. The fear of losing bees is still a legitimate concern, regardless of this announcement. 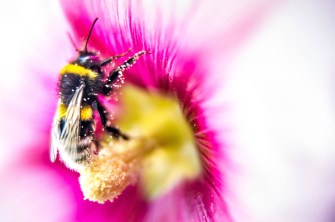 Regardless of this breakthrough, real bees still need to be protected.

On the project’s website, researchers point out that these micro-robots aren’t meant to supplant bees in total. Instead, this is a “stop-gap measure,” allowing time to find out why honeybee colonies are collapsing, should the trend begin again, and how to address it. Scientists envision thousands of such robobees traveling in swarms, leaderless, and coordinating with one another to complete missions. Though they wouldn’t be able to pick up nectar, each can travel from one flower to the next, carrying pollen.

Of course, as always with new technology, implications are bound to crop up, not perceived at the time of inception. Will we become more lax with environmental regulations, now that we know we have a replacement for bees?Another concern is privacy. How easy would it be for such robobees to be used for spying? Intelligence agencies and experts in corporate espionage might take a liking to them. If you think these hacking scandals are bad, wait until robobees come out.

Sci-fi and comic book fans don’t have to go through much of a stretch to see swarms of thousands of robobees each carrying an explosive device to enact assassinations or a terrorist attack. Though it will be years before this technology is viable out in the field, scientists, regulators, public officials, and the public at large should begin to parse out the implications and set up safeguards to protect citizens, society, and the environment as well. But for those worried about colony collapse and the implications for humanity, never fear, robobees are on the way!

Is There Really Such a Thing As Clean Coal?

An explanation of why clean coal is just fiction, or at best a climate-change denier’s fantasy.