Seemingly every year, some exhibition or book champions a new contender for the title of “Father (or Mother) of Modern Art.” The usual suspects, such as Pablo Picasso, J.M.W. Turner, Claude Monet, and Wassily Kandinsky, usually stand strong against such challengers. Eighteenth century art aficionadoLoyd Grossman now pushes a new, unlikely fighter into the ring — Benjamin West. In Benjamin West and the Struggle to be Modern, Grossman struggles to present West — an artist barely known today, but internationally famous in his day — and his painting The Death of General Wolfe — internationally famous in its day, but an art history footnote now — as the starting point for modern art, or at least the modern impulse to make contemporary figures as heroic, if not more so, than the heroes of the ancient past.

Americans may not recognize Grossman’s name, but the British best know him from various television shows and even from a line of “Loyd Grossman” sauces. In addition to food and celebrities, however, the Boston-born, British-bred Grossman knows his 18th century art, as shown by his resurrection of West as a key, albeit unconventional figure in the history of modern art. Grossman’s radical choice matches his radical background in music with the punk band Jet Bronx and The New Forbidden as well as his saucy approach to writing about culture.  Even if you’ve never heard of West and doubt a case for modernism could be made from Wolfe, you owe it to yourself to give Grossman a listen and see if he’s to your taste. 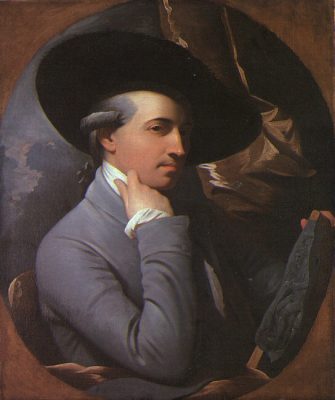 “To contemporary eyes, West looks like anything but a modern artist,” Grossman admits in the preface. “Yet Wolfe was a disruptive, even revolutionary picture that, I believe, helped to change the course of art.” There’s a sly modernity to West’s art similar to the sly, sidelong look the artist arrests us with in his 1770 portrait, painted the same year as Wolfe. Grossman positions West in the midst of “the mid-century crisis of representation: a crisis that West resolved triumphantly with Wolfe.” Whereas others couldn’t shake the classical tradition of Greece and Rome in portraying contemporary life, West resisted all compromises and, instead, “moved from history painting to painting history,” by seeing the contemporary as educational as the classical. Grossman puts West “in the vanguard that created Neoclassicism and Romanticism, and among the very first artists to represent the exciting and inspirational qualities of contemporary events.” But how does all this make West, and specifically Wolfe, modern? 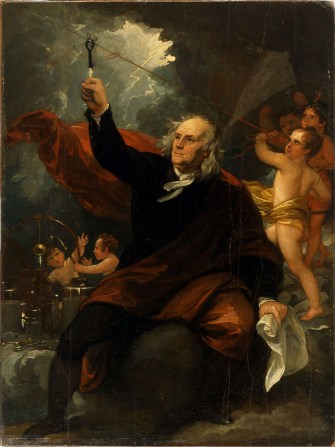 Grossman makes West “modern” via the French philosopher Michel Foucault. “Modernity is the attitude that makes it possible to grasp the ‘heroic’ aspects of the present moment,” Grossman quotes Foucault. If we think of modern art as Picasso, then West falls short. If we think of modern art as the attitude Picasso took — the guts required to assert modern life as worthy of artistic depiction as well as a style suited to the time — then West becomes strikingly modern. For example, in Benjamin Franklin Drawing Electricity from the Sky (shown above), West transforms the polymath Founding Father into a Zeus-like figure tossing thunderbolts around, yet never loses sight of the reality of Franklin’s accomplishment in the myth-making.

Similarly, The Death of General Wolfe (shown at top of post) took the real-life death of British General James Wolfe during the 1759 Battle of Quebec in The Seven Years’ War, borrowed all the tropes of religious painting, and came away with the ideal Christ-like “imperial martyr” for Grossman. Wolfe’s transfiguration simultaneously stood as a symbol for British supremacy via great sacrifice, as a symbol for the power of King George III (who became both patron and friend to West), and as a symbol of West’s new way of looking that would never look back again. Whereas conservative, establishment artists such as Sir Joshua Reynolds advised West to keep the status quo, West saw this new brand of history painting as his ticket to fame. 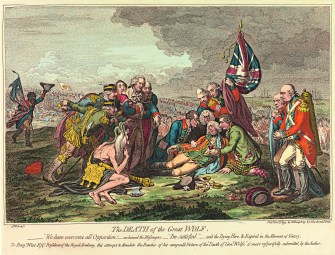 Grossman makes a compelling case for West as a proto-modern artist in more ways than just a modernizing attitude. “West was a member of the first generation of British artists to mature and flourish in the age of exhibitions,” Grossman points out. Whereas earlier artists played to a small gallery of the elite, West and his generation played on the larger, public stage through public exhibitions that brought blockbusters such as Wolfe directly to the public. New forms of reproduction, such as William Woollett’s engraving, made Wolfe and West international stars. Star Shakespearean actor David Garrick acted out Wolfe’s death at the foot of the painting at the height of its and his fame. West’s painting stuck in the public imagination strongly enough a quarter century later for James Gillray to use its imagery to satirize the “political death” of William Pitt the Younger (shown above). If your idea of a modern artist is one who’s seemingly everywhere, a la Jeff Koons or Damien Hirst, then West is unquestionably modern.

West and Wolfe left a long legacy behind them. Among the many students who traveled from America to England to study with West, Charles Willson Peale, Gilbert Stuart, and John Trumbull would go on to paint the history of America’s earliest days that still fills our history books. Grossman contends that, in addition to that direct lineage, “West … put something vital and persistent into the bloodstream of art” that trickles down to everything from Gustav Courbet’s Burial at Ornans, to Picasso’s Guernica, to Roy Lichtenstein’s Whaam! West may have made an early contribution to the modern-day propaganda machine by turning Wolfe into an “imperial martyr” par excellence, but he also contributed to the modern visual language of dissent against the status quo. Grossman’s Benjamin West and the Struggle to be Modernstudies West’s struggle to shape a new kind of history in art, but you’ll come away from it with a greater appreciation of what it means to be modern and how artists have been forging new paths from the past for centuries.

[Many thanks to Merrell Publishers for the images above from and for a review copy of Loyd Grossman’s Benjamin West and the Struggle to be Modern.]

Related
Starts With A Bang
Ask Ethan: What are white holes, and do they really exist?
In General Relativity, white holes are just as mathematically plausible as black holes. Black holes are real; what about white holes?
Life
Strange life forms create an “alien” ecosystem in an abandoned uranium mine
Slimy biofilms made up of bacterial and eukaryotic life forms have taken over an abandoned, flooded uranium mine in Germany.
Hard Science
Earth has an eerie “sodium glow,” and astronomers use it to image stars
Air currents in our atmosphere limit the resolving power of giant telescopes, but computers and artificial stars can sharpen the blur.
Health
How saliva changes the flavor of food
“It’s a liquid, but it’s not just a liquid.”
High Culture
Why are flood myths so common in stories from ancient cultures around the world?
Could the prevalence of flood myths around the world tell us something about early human migration or even the way our brains work?
Up Next
Surprising Science
Are Stress and Worry Good or Bad for You? It Depends on How You Cope.
A new study says people who worry are better prepared than those who don’t — but that’s not the whole story.