Dante Alighieri completed his epic poem “The Divine Comedy” in 1320. A spiritual journey through the world beyond the grave, a hell, a purgatory, and a paradise is considered a masterwork of world literature.

Calling his poem a “Comedy,” Dante uses the medieval classification: a comedy, he says in a letter to Cangrande Della Scala is “all poetry in middle style with a terrifying beginning and a happy end, written in the vernacular.” “The Divine Comedy” is replete with allegories which reflect the postulates of Catholicism along with Italian political issues at that time. Throughout the journey, Dante meets many historical figures from myths, the classical age, early Christianity and biblical history, Europe of the medieval period: Homer, Socrates, Aristotle, Julius Caesar, Cleopatra, Helen of Troy, Alexander the Great, Judas Iscariot, Solomon and many others.

Dante elaborates this idea and describes the underworld, with graphical vividness, deciding all the details of his architectonic. In the beginning, Dante’s hero meets the poet Vergil, and their path takes them through a colossal funnel of inferno with nine circles, or stages. Then they cross through the center of Earth and, after overcoming the seven terraces of Purgatory, finally reach the gates of Paradiso. The final, third part of the poem is dedicated to the journey of Dante through heavenly paradise with a new guide, Beatrice. Beatrice was Dante’s true love: she was a real person, and Dante decided to use her as an important character in his masterpiece.

Below you can see Illuminations, created by Master of the Antiphonar of Padua in the 14th century. In 1845, D. Pietro Zani, a writer and critic of Italian art, discovered the value of this manuscript. Later, in 1842, British Library became the owner of this parchment. The manuscript was digitized by British Library and could be found on Picryl, the largest public domain media search engine.

1. The first circle of Inferno: The Noble Caste: Here stay the souls of unbaptized infants and virtuous non-Christians. 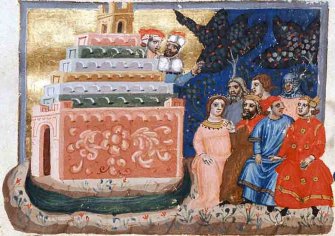 2. The second circle of Inferno: Lust: Souls overcome by lust are suffering from violent storms without rest. 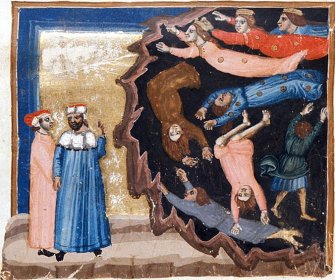 3. The third circle of Inferno: Gluttony : Gluttony is a sin of these souls. They are rotting in the rain and hail under the guard of Cerberus.

4. The fourth circle of the Inferno: Greed: Avaricious souls are doomed to drag enormous weights from place to place. 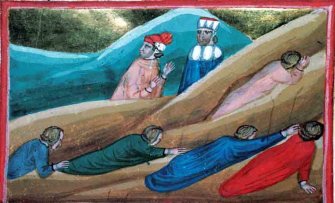 5. The fifth circle of the Inferno: Wrath:Dante and Virgil entering the black cloud of the wrathful souls. 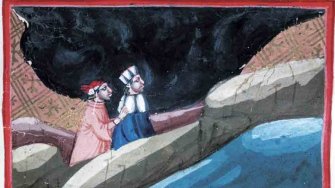 6. The sixth circle of the Inferno: Heresy:Dante bending over to speak to one of the proud souls, perhaps Oderisi of Gubbio. 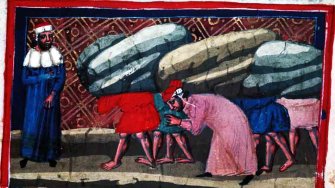 7. The seventh circle of the Inferno: Violence: Dante with Count Ugolino, who is gnawing the scalp of Archbishop Ruggieri. 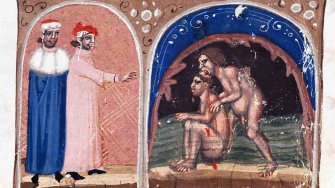 8. The eighth circle of the Inferno: Fraud: Statius and Dante observing the giant and the harlot in an embrace. 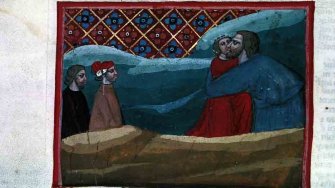 9. The ninth circle of the Inferno: Treachery: Dante speaking to Alberigho, who is lying in ice with traitors. 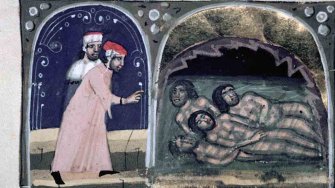 Related
Neuropsych
How you breathe affects your brain
Your breathing rhythm influences a wide range of behaviors, cognition, and emotion.
Health
What happens when regular porn watchers abstain for a week?
Researchers watched for signs of withdrawal — but didn’t find any.
Neuropsych
Daily caffeine intake temporarily alters your brain structure
Compared to people who took a placebo, the brains of those who took caffeine pills had a temporarily smaller gray matter volume.
Thinking
Why you should laugh at yourself, according to Seneca and Nietzsche
“It is more human to laugh at life than to lament it.”
Hard Science
The violence of the Tonga eruption is a wake-up call to watch other submarine volcanoes
Out of sight, but not out of mind.
Up Next
Surprising Science
Geneticists Find Most Early Humans Left Africa in a Single Migration
Three new studies suggest early modern humans migrated from Africa in one massive migration between 75,000 and 50,000 years ago.