At a U.S. House of Representatives hearing on October 12th, experts warned that the greatest existential threat to the country may come from the detonation of a nuclear EMP bomb. It could kill as many as 90 percent of all Americans within a year.

What would an EMP attack actually do? It could involve the detonation of a hydrogen bomb delivered by missile or even satellites at a high altitude of 30-400 km, creating an electromagnetic pulse that would knock out the electrical grid. But not only that – all electrical devices in the range of the blast could be fried. No lights, no computers, no phones, no internet, not even cars would work. The lack of refrigeration is likely to spoil food, causing mass starvation. Add to that lack of clean water, no air traffic control or any financial transactions taking place and you have widespread devastation in the U.S.

The casualties incurred would not be from the explosion, as it can happen too high for its nuclear effects to be felt strongly on the ground. But the loss of life-sustaining infrastructure could bring slow but sure disaster.

This kind of doomsday prediction comes courtesy of two members of the former congressional EMP commission – Dr. William R. Graham and Dr. Peter Vincent Pry. Dr. Graham is a physicist who was a science advisor to President Reagan and administrated NASA. Dr. Pry is a former CIA officer responsible for analyzing Soviet and Russian nuclear strategy, who has served on numerous congressional boards related to security.

They appealed for President Trump to prepare the country’s infrastructure for an EMP attack via a number of possible steps while lambasting the U.S intelligence apparatus for ignoring warning signs and constantly underestimating North Korean capabilities.

In a statement, the scientists identified how just six months ago, most experts didn’t think much of North Korea’s nuclear arsenal, considered their ICBMs were fake, predicted that a hydrogen bomb was years away and maintained that the communist pariah state could not strike the U.S. mainland. As all such assessments were proven incorrect or overly optimistic, the time has long since come to prepare for the worst possibility of all – an EMP attack, admonished the specialists.

One danger specific to EMP attacks is that they could also be the most acceptable to world opinion.

“An EMP attack would be the most militarily effective use of one or a few nuclear weapons, while also being the most acceptable nuclear option in world opinion, the option most likely to be construed in the U.S. and internationally as “restrained” and a “warning shot.”, wrote Dr. Pry in an opinion piece for the Hill.

The EMP commission was actually defunded on September 30th. It was created in 2001 and has been extended several times over the years, the last time in 2016. This extension was allowed to lapse, even as North Korea issued a specific threat in September to carry out an EMP attack and published a technical paper in the official communist party paper “Rodong Sinmun” outlining some details about it.

Here is the Google translation of that paper, which can be found on the Korean version of the paper’s site (at number 33). 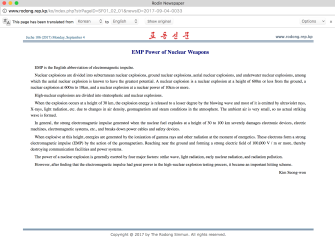 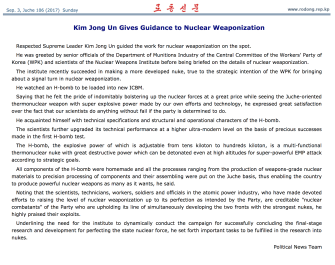 Glue Made of Human Protein Heals Wounds Faster and Better

Another bit of science fiction is coming to life as scientists develop a highly elastic and adhesive surgical glue, similar to the one Ryan Gosling used to seal his wound in Blade Runner 2049.