As the ‘Leave’ vote became clear around 6 a.m. this morning, confirming the surprise exit of Britain from the European Union, British citizens apparently took to the Google to find exactly what they had done. Searches of the question, “What is the European Union?” began exploding in popularity within hours of the referendum polls being closed.

The graphic below is from Google Trends, a fun public resource anyone can use to find out what certain countries are curious about — or the whole world for that matter — at different points in Google history. 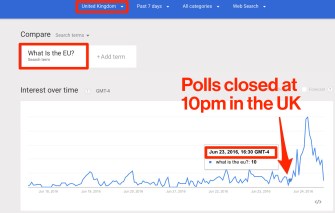 Until the very last hours of the so-called ‘Brexit’ vote, pollsters had predicted an extremely close result that — perhaps inevitably, some felt — would keep the UK inside the world’s largest consumer trade block that is the EU. Instead, what has been a largely nativist and populist campaign took the British public by a wider margin than was expected.

As our own Frank Jacobs said, “The European Union’s explicit goal is to move toward ‘ever closer union’ — three words that summarise exactly why many Brits want to get out of the club.”

69 percent of the global diet is "foreign," says a study that pinpoints the origin of 151 food crops.
Up Next
Culture & Religion

The Grammy-nominated comedian on mean jokes, bigotry, courage, and bringing light vs. darkness into the world.