As either individual expression or tribal affiliation, tattoos say a lot. More popular than ever, tattoos have moved “from subculture to pop culture.” The fact that 36% of Americans between 18 and 25 have at least one tattoo ensures that at least some of the social history of this period and at least the near future will be written in tattoo ink. That statistic makes cartoonist Paul Thomas‘s An Unreliable History of Tattoos not only an interesting, hilarious read, but also, perhaps, a glimpse into the future. Is history written best in tattoo ink? 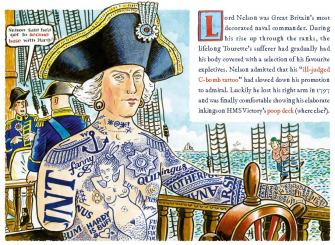 Direct evidence of tattooed human skin goes back to more than 3,000 years BC with Ötzi the Iceman, but tattooing itself probably reaches back even longer. Paul Thomas, a British political cartoonist and satirist whose work’s appeared in multiple newspapers since 1987, however, imagines tattoos in the Garden of Eden, with Adam and Eve covering up post-apple “to hide their disfiguring inkings rather than in embarrassment at their exciting collection of reproductive organs.” Thomas quickly moves through ancient history, touching on Paleolithic tattoos and the “tramp stamp” Cleopatra uses to seduce Julius Caesar and Mark Anthony, before moving on to British history (im)proper. Among Thomas’ victims from the pantheon of Britannia, “Great Britain’s most decorated naval commander” (get it?) Lord Horatio Nelson appears shirtless on deck, the “C-bomb tattoo” on his right arm fortunately abbreviated by an amputation in 1797 (shown above). Covered with everything from mermaids to epaulettes, historical references to profanities, Nelson’s just one of the many figures whose lives are packed into one hilarious, intricate panel by Thomas. 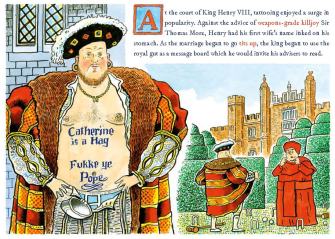 Thomas prefers to be called “a professional cynic,” whose job it is to be “extremely rude about the people who are trying to tell us all what to do.” History’s typically written by and about the winners—the rulers—and Thomas follows suit, but does so with extreme and insightful rudeness. King Henry VIII assumes the same “superman” pose as in Hans Holbein the Younger‘s famous portrait (shown above), but opens the royal robes to reveal nipple rings, an insulting, altered tattoo of his first wife‘s name, and a clear, vulgar message for the annulment-denying Pope. In addition to the comic illustrations, Thomas comes up with hilarious historical quips, whether it be calling Sir Thomas More a “weapons-grade killjoy” or having Henry’s second wife, Anne Boleyn, kneel at the chopping block with “cut here” written on her neck in French. An Unreliable History of Tattoos reads like a more vulgar, more unashamedly gallows humor version of Blackadder, in convenient book form. 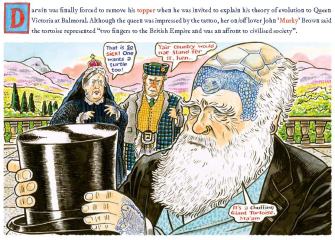 “I’m only really concerned with making my target audience—my editor—laugh,” Thomas argues. “It’s not really much more complicated than that.” But, intentionally or not, I think Thomas is doing much more than playing for laughs in An Unreliable History of Tattoos. Aside from teaching a detailed, highly accurate history lesson (aside from the tattoos, of course), Thomas’ book says something significant about how history is embodied, literally in the bodies of those doing it. Wouldn’t it be great and greatly appropriate if Charles Darwin bore a giant tortoise tattoo on his bald pate (shown above)? History dies when reduced to dry dates, names, and places, but lives imaginatively when elevated to the stories of the personalized lives of individuals achieving great things. Tattoos tell others who we are. Thomas’ historical tattoos tell us who we’ve been. Thomas takes tattoos—an often degraded art form—and sticks them beneath the skin of history to dig deeper and bridge the gap between highbrow and lowbrow history and culture (and all while working with a publisher called Nobrow). 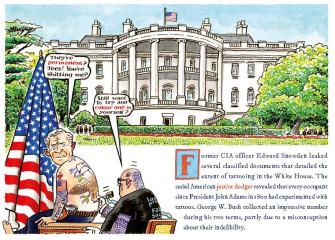 Non-anglophile Americans may struggle with the finer points of Thomas’ Brit-centric humor, but Thomas takes plenty of shots at the former colonies. He imagines George W. Bush getting a cowboy-hat—wearing eagle tattooed to his back (shown above) unaware that it, like his other tattoos (and wartime actions), is permanent. Exactly one Clinton—Lewinsky joke later, Thomas pictures George Washington‘s body—covered with the tattooed text of the American Constitution as it was drafted (“like an early form of Twitter”)—on display for schoolchildren to read and learn. But even if you don’t get Thomas’ subtler jokes, the humor’s usually broad enough (Churchill parachuting onto the Bavarian Alps to try to kill Hitler via tattoo, for example) that you’ll laugh anyway. 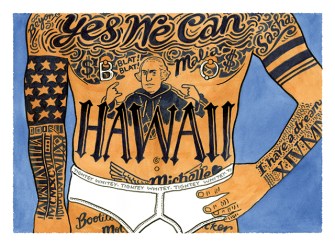 If there’s a defining body type of America in 2016, it’s the black male body. More specifically, it’s the body of President Barack Obama, who embodies all by himself all the political and racial divisions that separate us. When Thomas imagines Obama’s torso (shown above) covered in ink with “Hawaii,” “Yes We Can,” “I Have a Dream,” and even George Washington flashing gang signs rapper-style, he sums up in one image everything the man stands for and symbolizes to his adversaries. Thomas calls his An Unreliable History of Tattoos, but the truth is that you can rely on Thomas’ wit and cynic’s wisdom to “keep it 100” while turning the humanity of his history lesson “up to 11.”

Collecting Sperm From a Dead Man’s Simple. The Ethical Issues Are Not.

About the ethical and legal issues surrounding post-mortem sperm collection.