Two years from now, Americans will be two months away from inaugurating a new president. Who will it be? A bunch of Republican and Democratic names (no, Hillary’s isn’t the only one) are being bandied about as potential candidates. But the identity of the contenders may not matter a whit if Republicans implement a plan that would virtually guarantee their guy (or gal) beats the Democrat in 2016. Call the plan craven, call it cunning, call it what you will. The plan is foolproof. It’s just a question of whether enough Republicans have the gall to go for it.

At Vox, Matthew Yglesias aptly calls it the “totally legal, totally shady way that Republicans could ensure Hillary Clinton’s defeat.” So what’s the plan? Start by remembering that when it comes to selecting a president, the people don’t have a direct say, really. We vote for state electors; it’s those 538 electors, known as the Electoral College, who elect the president. This means that candidates for president can win the popular vote while losing the electoral vote—a cognitive dissonance of democracy that has occurred four times in American history. (The last time was in 2000, when Al Gore received 540,000 more votes than George Bush but, thanks to the Supreme Court’s ruling in Bush v Gore, ended up with 266 electoral votes to Bush’s 271.)

The GOP 2016 plan relies on the nearly unbounded leeway the framers of the Constitution gave states to determine how they allocate electors. Here is the second paragraph of Article II, section 1:

Each State shall appoint, in such Manner as the Legislature thereof may direct, a Number of Electors, equal to the whole Number of Senators and Representatives to which the State may be entitled in the Congress…

Those ten magic words (“in such a Manner as the Legislature thereof may direct”) is the textual peg for rigging the next election. As it stands, 48 states use a winner-take-all model, allocating all of their electors to the candidate who wins the popular vote in the state. Two states, Maine and Nebraska, distribute their electors differently. Candidates there are assigned one electoral vote for every congressional district they carry, and the overall state winner receives two more. In theory this means Maine and Nebraska could split their electoral votes; in practice, because voters in Maine’s two districts vote reliably Democratic and all of Nebraska is painted deep red, a split has yet to occur

But the national picture would change dramatically if states like Florida, Iowa, Ohio, Michigan, Nevada and Wisconsin—all of which voted for Obama in 2012—adopted a divided allocation plan. As Yglesias writes, this “would make a huge difference.” Why? “Democrats count on securing the electoral votes—all the electoral votes—of four or five of those states in order to win presidential elections.” If Democratic candidates started receiving say, 6 electoral votes from Wisconsin rather than the full 10, or 10 votes from Michigan rather than the complete 16, their pathway to presidential victory is suddenly strewn with obstacles. And if a large handful of these states got together to back away from winner-take-all, Democrats could be doomed.

Why is this a possibility now? Because Republicans embarrassed Democrats in this month’s midterm elections not only in congressional races but in governors’ races and in the statehouses. Look at this sea of red in Vox’s map: 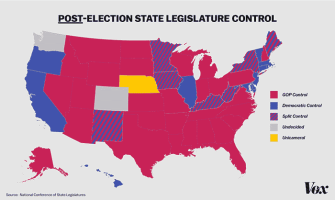 Democrats now control exactly zero of the state legislatures in the six crucial states listed above; in Iowa the two houses of the state assembly are split between the GOP and Democrats, but everywhere else the Republicans have a firm grip. This means the Republicans control their own destiny. They can remain winner-take-all in states that vote dependably for Republican presidential candidates, and they can split the electoral vote in places like Florida, Pennsylvania and Wisconsin where voters prefer Democratic presidents.

More nitty gritty comes from Ian Millhiser at Think Progress. Millhiser reportsthat just last week, a GOP Michigan legislator got the ball rolling on a plan to change electoral vote allocations from the Wolverine State. If efforts are successful there and elsewhere, the grand plan could actually work. Here is a Think Progress table laying out the strategy for six key states: 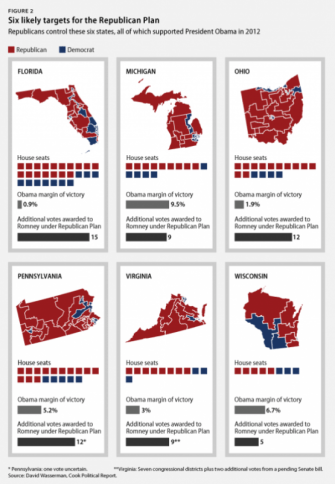 It’s too early to tell if this ploy will come to pass. It would require coordinated efforts across several states. It would expose the GOP to charges that they are gaming the system in an unusually aggressive way. And if the 2016 Republican candidate wins an electoral victory under this scheme but handily loses the popular vote, the next president will have a serious cloud hanging over the White House and a backlash may ensue—not only against the GOP but against the Electoral College, an institution many already regard as an anti-democratic relic of the 18th century that has outlived its usefulness.

People around the world, mostly Generation Z, are obsessed with the look and feel of gothic, elitist universities. Why?
Up Next
Culture & Religion

With a $20,000 check and instructions to bring back “some good paintings” from friend and financier Dr. Albert C. Barnes, American artist William Glackens set off for Paris in 1912 with carte blanche to buy the very best modern art he could find. Long a champion and connoisseur of European and American modernism, Glackens sent back to Barnes 33 works by now-renowned artists such as Paul Cézanne, Pierre-Auguste Renoir, Pablo Picasso, and Vincent Van Gogh that helped shape the collection that eventually became The Barnes Foundation.