Valentine’s Day — or at least something like it — is celebrated all over the world. In each place, declarations of love are expressed in ways befitting the local culture. Not all of these celebrations, however, take place on February 14th as in the U.S.

There’s China’s lovely Qixi Festival, which takes place in August, and translates to “The Night of Seven”. It honors the eternal love between a fairy named Zhinu and a mortal named Niulang who wound up as two glittering stars in the night sky.

Other countries aren’t quite as romantic: Russians express their affection for boys and men on Defender of the Fatherland Day on February 23, and girls and women on March 8th’s International Women’s Day. Nonetheless, in places like the 10 listed below, February 14 is the day of romantic celebration.

How fitting that the world’s first Valentine’s Day’s card was written in 1415 by a Frenchman, Charles, Duke of Orleans, while imprisoned in the Tower of London. He sent his wife a poem, signing it, “Your Valentine.” 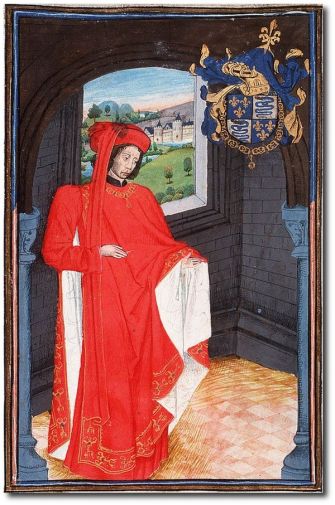 This guy. He started it. (Jean de Bourgogne)

The country of lovers has had some interesting Valentine’s Day traditions, including the loterie d’amour, or “drawing for love”, which harkens back to the Valentine’s Day origin festival of Lupercalia. Imagine two houses facing each other, one filled with men and one with women. From each house, people summoned their amour by name. Men could ditch their callers if they wanted to, and unmatched women would gather later around a bonfire where they’d burn pictures of men who’d spurned them, and then talk trash about males in general. This was done with such, how you say, enthusiasm that the whole thing is now banned.

In the Philippines, they celebrate Valentine’s Day much as we do here, only super-sized. In 2004, 5,122 couples got together at the holiday on the Manila waterfront to set the world’s record for the most simultaneous kisses. 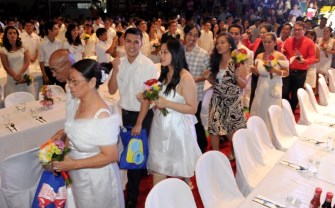 Since then, they’ve been setting records for the next step (well, maybe not the next), marriage. In 2010 in Caloocan City, 1,500 couple, all clad in white, got married at the same time. This record was topped in 2013, when 4,000 couples tied the know in the same ceremony.

3. Denmark — Very funny, whoever you are

The austere Scandinavians they send each other “snowdrops,” pressed white flowers, in addition to more conventional cards. They used to send cards with a photo in each showing sender presenting the recipient with a gift. 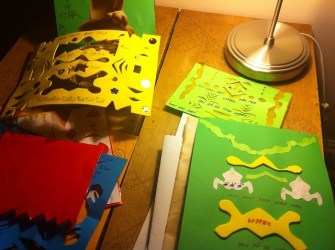 Valentine’s Day is also when men send their partners a gaekkebrev, or “joking letter,” that contains a comical poem written on intricately cut paper, and that they sign with an unhelpful bunch of dots. Good news: If a woman guesses who sent her a gaekkebrev, she’s rewarded with an Easter egg come spring!

In this country, Valentine’s Day is merely the first of a trio of romance-related days. 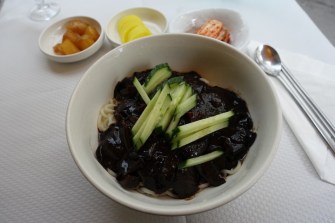 On February 14th, women give their loves the sisal gifts of cards, candy, and flowers. On March 14th, “White Day,” the men reciprocate. April 14th is the day for everyone else, the days when lonely singles eat black bean-paste sauce on noodles, jajangmyeon, from their own little bowls of soul-crushed darkness.

Pigs represent luck and lust, and so, chocolate pigs and other similar sweets are also exchanged in Deutschland. 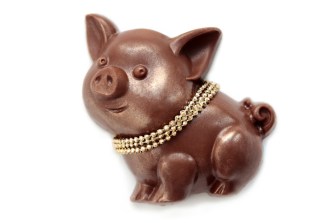 Valentine’s Day in Germany features many of the same gifts we exchange in the U.S., with the addition of large, heart-shaped ginger cookies with sweet messages — “Ich liebe dich” — emblazoned on them. 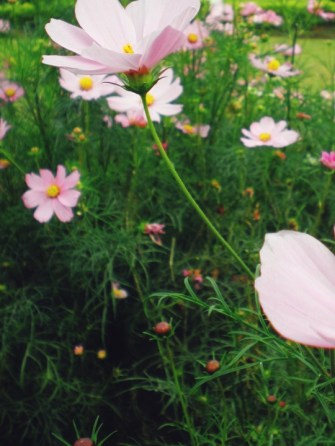 Taiwan loves Valentine’s Day so much, they celebrate it twice, once on Feb 14th, and again July 7th. For this lush garden island, it’s all about giving flowers, with different colors and quantities corresponding to different messages. But be sure to count carefully: Sending 108 flowers says, “Will you marry me?”

You may know that Ghana is one of the world’s major growers of the cacao beans from which chocolate, Valentine’s Day chocolate comes. 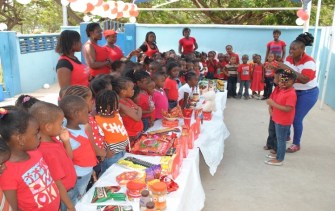 So on Valentine’s Day since 2007, the Ghanaian government has been promoting February 14th as National Chocolate Day, tied in with Valentine’s Day, to promote tourism, with chocolate-themed restaurant menus, exhibitions, and public talks about the heart’s favorite candy.

Italian couples celebrate the holiday with romantic dinners and gift-giving. A favorite treat is a Baci Perugina. They’re chocolate-covered hazelnuts that come with a message of love in four languages. 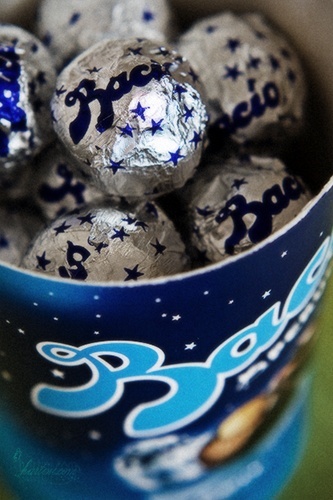 They’ve been celebrating Valentine’s Day for a while, treating it at one point as a spring festival. Another older, slightly insane, tradition is for young girls to wake up before dawn on Valentine’s Day — the first (presumably single) man they see was to be their future husband. Or at least look like him.

9. Japan — It’s about your choice of candy

An ancient nation like Japan has had time to develop some pretty sophisticated etiquette regarding quite a lot of things, and Valentine’s Day candy is no exception.

It’s a day for women only to send candy to men. If you’re giving someone a gift of chocolate, better make sure it’s the correct kind. For friends and business associates, it’s Giri Choco. When you want to send a more, let’s say, intimate gift, send Honmei Choco. A month later, it’ll be the gents’ turn on White Day.

One way to find out if she has a thing for you in South Africa is to see if she’s wearing your name in a heart on her sleeve on Valentine’s Day. 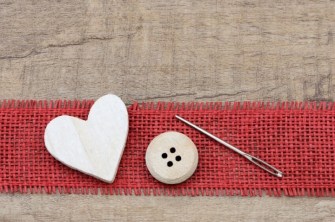 This seems to be based on a celebration that pre-dates Valentine’s, Lupercalia, which involved sacrificing goats, and men in goat skins whipping women to “bless” them with fertility!? Yipes. A heart on the sleeve is just fine, thanks. On the other hand, there was also a ceremony in which men drew women’s’ names at random from a box, pairing off the couple until next Lupercalia, which sounds like the premise for a sitcom.

Wherever you — and assuming you’ve graduated from grade school — best of luck to you this Valentine’s Day!

Related
The Present
How heat pumps of the 1800s are becoming the technology of the future
Innovative thinking has done away with problems that long dogged the electric devices — and both scientists and environmentalists are excited about the possibilities.
Starts With A Bang
JWST’s hunt for most distant galaxies gets double boost
Along with gravitational lensing and ALMA’s incredible long-wavelength spectroscopy, JWST is reshaping our view of the early Universe.
Thinking
Finding your essential self: the ancient philosophy of Zhuangzi explained
Adopting a healthy scepticism towards inherited ideas means “emptying the container of the Self.”
The Future
Startup’s bladeless flying car is designed to reach Mach 0.8
One of Jetoptera’s VTOLs is expected to reach speeds of around 614 mph, about as fast as a commercial jet airliner.
Health
New blood types are often discovered following medical disasters
New blood types are regularly discovered by an unusual absence or an unusual presence — both of which can result in tragedy.
Up Next
Starts With A Bang
Satellite Galaxies Live In The Same Plane As Their Hosts, Defying Dark Matter Predictions
But is this really a problem for the theory? Or is it physics to the rescue?Dark matter is one of the most powerful, yet one of the most controversial, ideas to […]