Burn A Dollar and Find Out Who Your Friends Are 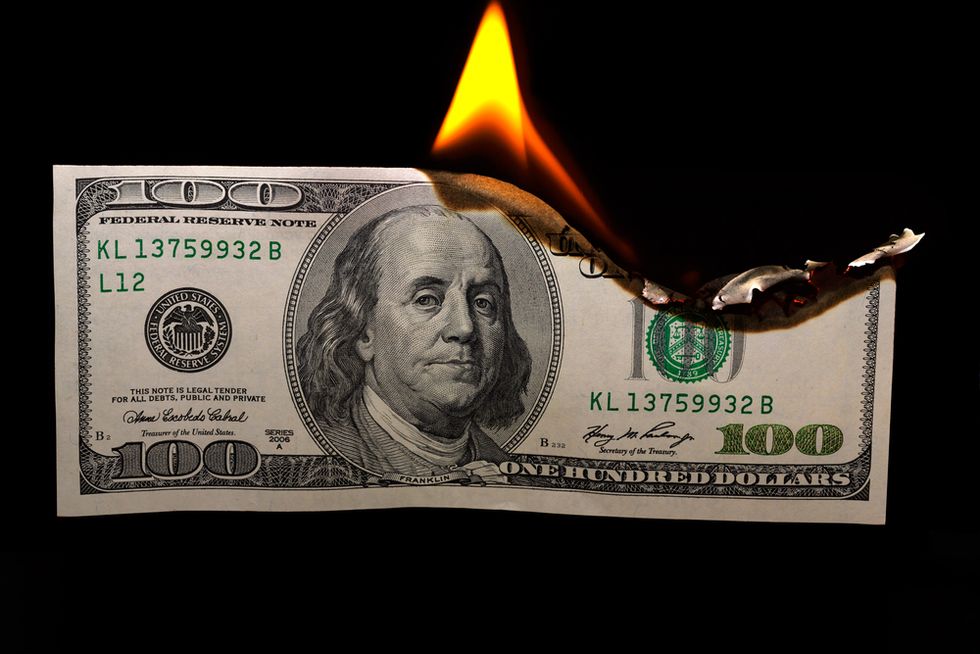 I contributed to Bang for Your Buck over at The Morning News with how to best invest a dollar. They needed something a little more succinct so I'm including my longer version here.

The greatest value you'll get out of a dollar is from burning it front of your friends. People will get upset. It will be pointed out that burning money is illegal. Someone will call you an asshole. You might lose a friend. Or two.

I’ve based my life on the idea that success can be valued by money. I have a fluctuating share price that indicates my success. Money is important to me as a tool of measurement. While I take the idea to an extreme we all use money to measure ourselves. How much we earn reflects how important society deems our profession. How much debt we are allowed to have determines how much society thinks of our potential. Money is the implicit ruleset of our society.

When you burn a dollar in front of someone they react with shock and anger. It’s a deep anger from their core. Ant attempt to reasonably explain how they feel fails. They’ll say it’s wasteful, you are breaking laws, or that you should give the dollar to charity, but the problem is not about how else the money could be used. You can waste money in a lot of ways, we all break plenty of laws, and a dollar just isn’t worth very much. (Even if you had a magic copy machine and made another dollar you still couldn’t buy a cup of coffee.)

They get get angry because burning a dollar is insulting. It’s like burning the flag or a Bible. It’s a violation of the rules of how our society works. You have a job, you get paid, and spend your money to enjoy life. If you burn money then why are you working? Why get out of bed? Why live at all!? If you aren’t following the rules then you aren’t playing the game, and that’s cheating. And weirdly you aren’t even cheating for your own gain. It’s just a very mild form of sabotage.

Burning a dollar is the most anti-Warren Buffett thing I’ve ever done, and yet penny for penny, there is no bigger statement a dollar can make than its own destruction. Think of the millions a company spends on trying to provoke reactions. They buy marketing, advertising, trade shows, endorsements… anything to get you to pay attention. All they need to do is take a dollar bill, and light it on fire in front of their closest friends.

The ability to burn a dollar doesn’t tell you much about a person. They may just be seeking attention, maybe they are a nihilist, or maybe they just love to set things on fire. The only telling result of burning money is in the refusal. If a person can’t bring themselves to burn a dollar there are elements of conservative thinking, fear, and conformity. Burning money is easy for some, unpleasant for most, and impossible for a few.

As with any investment, this act involves risk. People often repeat behaviors that provoke a reaction, and burning money will get you a lot of attention. You might find yourself burning bills at BBQs, camp-outs, and restaurants with candles. As the thrill of burning a dollar wanes you might move on to a five, maybe even try a twenty?

One day you'll find yourself sitting in front of a fireplace at a rental on the coast, third cognac of the evening in hand, surrounded by friends. One of them will beat you to the punch and toss a bill on the fire. All heads turn toward you as you set your snifter down on the marble coffee table and pull out your billfold. The group hushes as you flip through the cash you brought for the weekend getaway. Extracting a crisp new hundred dollar bill causes someone to say, "No!" but your own heart is beating a little faster and you don't turn to see who it was. This is no longer a symbolic gesture, this is real money.