Marie left the interview room and walked down the stairs of the police station, accompanied by a detective and a sergeant. She was no longer crying. At the bottom, the police handed her off to the two people who were waiting for her there. Marie belonged to a support program for teenagers aging out of foster care. These two were program managers. 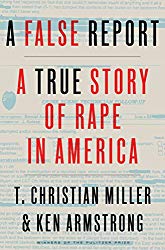 It had been one week since Marie, an eighteen-year-old with hazel eyes, wavy hair, and braces, had reported being raped by a stranger with a knife who had broken into her apartment and blindfolded, bound, and gagged her. In that week Marie had told the story to police at least five times. She had told them: thin white man, short as five feet six. Blue jeans. Hoodie–gray, maybe white. Eyes–possibly blue. But her story wasn’t always the same in the telling. And the police had heard from people in Marie’s life who had doubts. And when the police had confronted Marie about those doubts, she had wavered, then buckled, saying she had made the story up–because her foster mom wasn’t answering her calls, because her boyfriend was now just a friend, because she wasn’t used to being alone.

Because she had wanted attention.

She’d sketched her history for the police detectives. She’d described growing up with something like twenty different foster parents. She’d told them she had been raped when she was seven years old. She’d told them that being on her own for the first time had made her scared. Her story of being raped by an intruder had “turned into a big thing that was never meant to happen,” she’d told the police.

Today she had tested whatever patience the police could still summon. She had returned to the station and doubled back, saying she had told the truth the first time, saying she really had been raped. But when pressed in that interview room she had folded once more–admitting, again, that her story was a lie.

No, Marie told the managers at the bottom of the stairs.

No. I was not raped.

The two managers, Jana and Wayne, worked for Project Ladder, a nonprofit program that helped foster kids make the transition to living on their own. Project Ladder taught teenagers–eighteen-year-olds, mostly–the mundane skills of adulthood, from how to shop for groceries to how to manage a credit card. The biggest boost the program provided was financial. Project Ladder subsidized each teen’s one-bedroom apartment, making it possible for the kids to get a foothold in the expensive rental market ringing Seattle. Wayne was Marie’s case manager. Jana was a program supervisor.

If that’s the case, the managers told Marie, if you weren’t raped, then there’s something you have to do.

Marie dreaded whatever was next. She had seen it on their faces when she’d answered the question. They weren’t thrown. They weren’t taken aback. They’d doubted her before, just like the others. It occurred to Marie that from now on, people would think she was mentally ill. She, too, wondered if she was broken, if there was something in her that needed to be fixed. Marie realized just how vulnerable she had become. She worried about losing what little she had left. A week ago, she’d had friends, her first job, her first place to call her own, freedom to come and go, a sense of life unfurling. But now that job and that sense of optimism were gone. The place and her freedom were in jeopardy. And friends she could turn to? She was down to one.

Her story had, indeed, turned into a big thing. Last week the television news had been all over it. “A western Washington woman has confessed that she cried wolf,” one newscast said. In Seattle the local affiliates for ABC, NBC, and CBS had covered the story. The NBC affiliate, KING 5, zoomed in on Marie’s apartment complex–panning up the stairs, lingering on an open window–while Jean Enersen, Seattle’s most popular anchor, told viewers: “Police in Lynnwood now say a woman who claimed she was sexually assaulted by a stranger made up the story. . . . Detectives do not know why she made the story up. She could face a charge of false reporting.”

Television reporters had pounded on her door, tried to get her to answer questions on camera about why she had lied. To get away she’d snuck out, a sweatshirt over her face.

Her story found its way into remote corners of the Internet. False Rape Society, a blog that focuses on wrongful accusations, posted twice about the Lynnwood case: “Another in a seemingly endless cavalcade of false rape claims. Once again, the accuser is young–a teenager. . . . To underscore how serious this particular kind of lie is, sentencing for false rape claims needs to be tougher. Much tougher. Only then will the liars be deterred.” A Londoner who compiles an “international timeline of false rape allegations” going back to 1674 made the Lynnwood case his 1,188th entry, following a Georgia teenager who “had consensual sex with another student then pointed the finger at an imaginary man who was driving a green Chevrolet,” and a teen in England who “appears to have withdrawn her consent after texting him to tell him how much she enjoyed it!” “As will be seen from this database,” the compiler writes, “some women will cry rape at the drop of a hat, or more often after dropping their knickers then regretting it.”

In Washington and beyond, Marie’s story became an exhibit in a centuries-long argument about credibility and rape.

The news stories hadn’t named her. But the people around Marie knew. A friend from tenth grade called and said: How could you lie about something like that? It was the same question the TV reporters wanted to ask. It was the same question Marie got wherever she turned. She didn’t answer her friend. She just listened, then hung up–another friendship, gone. Marie had let another friend borrow her laptop computer–one of those old black IBMs–and now the friend refused to give it back. When Marie confronted her, she told Marie: If you can lie, I can steal. This same friend–or former friend–would call Marie and threaten her, telling her she should die. People held Marie up as the reason no one believed real victims of rape. People called her a bitch and a whore.

The Project Ladder managers told Marie what she had to do. And they told her that if she didn’t do it, she would be cast out of the program. She would lose her subsidized apartment. She would be without a home.

The managers took Marie back to her apartment complex and summoned the other teens in Project Ladder–Marie’s peers, kids her age with the same kinds of stories to tell about growing up as wards of the state. There were around ten of them. Most were girls. In the front office, near the pool, they gathered in a circle and sat down. Marie stood. She stood and told them–told everyone, including the upstairs neighbor who one week before had made the 911 call to report the rape–that it was all a lie, that they didn’t need to worry: There was no rapist out there to be on guard against, no rapist the police needed to be looking for.

She cried as she confessed–the sound magnified by the awkward silence surrounding her. If there was sympathy in the room, Marie sensed it from just one person, a girl sitting to her right. In everyone else’s eyes she saw a question–Why would you do that?–and a corresponding judgment: That’s messed up.

She had one friend left to turn to, and after the meeting, Marie made for Ashley’s home. Marie didn’t have a driver’s license–just a learner’s permit–so she walked. On the way there, she came to a bridge. The bridge crossed Interstate 5, the state’s busiest road, a north–south highway with a ceaseless current of Subarus and eighteen-wheelers.

Marie thought about how much she wanted to jump.

She took out her phone, called Ashley, and said: Please come get me before I do something stupid.

Then she threw her phone over the side.

Excerpted from A FALSE REPORT. Copyright © 2018 by T. Christian Miller and Ken Armstrong. Published by Crown, an imprint of Penguin Random House LLC.

Looking up at the night sky gives us a glimpse of the Universe beyond our terrestrial concerns. Here’s what’s out there.
Up Next
Personal Growth

Searching for meaning in your life? This Japanese concept can help you find it