In the post-modernist, Western world, religious life has decreased substantially, patriotism has been replaced with a widespread distrust of the government, and getting ahead has become exceedingly difficult. As a result, more and more people are falling victim to ennui. This dreadful feeling of bitter disillusionment stems from the loss of meaning in their lives.

A lack of purpose can increase the risk of mental health issues, such as anxiety and depression, resulting in poorer sleep, worsening health, and in extreme cases, substance abuse and thoughts of suicide. Some have turned to the East, most recently, to the ancient Japanese concept of ikigai, which means, roughly, “to live the realization one hopes for.” Another interpretation, “that which makes life worth living.” Take note that there’s no exact English translation.

Iki means “life,” whereas gai means “value” or “worth.” Gai comes from the word kai meaning “shell.” This refers back to the Heian period (794 to 1185), when shells were considered valuable. We can interpret ikigai as finding value in one’s life or discovering one’s purpose.

In the West, self-help gurus and movements of one flavor or another have come and gone, and in the wake of each, though often lighter in the pocket, few of their participants find real solace. Perhaps rather than happiness, which is generally momentary and fleeting, we should seek a purposeful life. Exploring the concept of ikigai and the questions that come with it, can help one find a solid purpose and through this, contentment and drive.

The whole concept has been boiled down to four questions:

3) What does the world need from you?

If you’re retired, you may not have to worry about what you can be paid for, so you can delete that one and focus on the remaining three. The idea is not only to find your purpose but the proper balance between all aspects surrounding it. Another consideration, one’s ikigai doesn’t affect the individual alone.

For the Japanese, the concept has a social element. It’s about getting comfortable with your role in your family, job, and society. It’s traditionally split along gender lines. While men usually associate their ikigai with their work and career, women (at least traditionally) associate it with motherhood and their role in the family. And even though ikigai has recently become the latest New Age buzzword in the West, this doesn’t make it any less effective for those who find themselves at a crossroads, with no sign to guide them.

Ikigai author Hector Garcia told The Independent that it all snaps into place when you get engrossed in a task and achieve that flow state. “Have you ever been so absorbed in a task that you forget to drink and eat?” Garcia asked. “What type of task was it? Notice those moments when you enter flow, and your ikigai might be embedded in those moments.”

Author Dan Buettner told the BBC in order to find your ikigai, you should write three lists. The first is your values, the second things enjoy doing, and the last, things you are good at. “The cross section of the three lists is your ikigai,” he said. 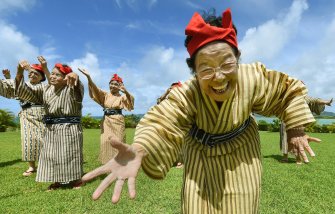 Okinawans enjoy great longevity, which they partly credit to their belief in ikigai. Credit: Getty Images.

Lecturer and anthropologist Iza Kavedžija writes in The Conversation, that through interviews with older Japanese, she found that they regarded ikigai as the mastery of something. It was closely related to the phrase “chanto suru,” or doing things properly. The concept of ikigai is strongly related to the Japanese island of Okinawa, whose inhabitants enjoy remarkable longevity. Many centenarians can be found there, and some credit finding their ikigai with a long, healthy life.

One limitation is, if one sees their work as their ikigai, they may neglect their family, friends, and hobbies, which are just as important and fulfilling. Moreover, the Japanese themselves are finding it difficult to achieve ikigai. According to a 2010 survey, just 31% of Japanese respondents said they’d found theirs.

And if you achieve yours, is that the end? Professor Gordon Matthews of Chinese University in Hong Kong told The Telegraph, those who have a clear sense of ikigai can achieve higher aspects of understanding beyond it, such as “ittaikan” or a sense of oneness with one’s social role, and “jiko jitsugen” or self-realization.

Did life on Earth start in space? Study finds evidence of panspermia

A new study shows bacteria could survive travel from Earth to Mars.
Life

Certain water beetles can escape from frogs after being consumed.
Hard Science

Astronomers spot periodic lights coming from near the black hole at the center of our galaxy.
Hard Science

What was it like to live in a Japanese concentration camp?

During World War II, the U.S. incarcerated over 100,000 Japanese Americans in concentration camps throughout the West.
Up Next
Hard Science

The biggest climate change decision: Should you have children?

Environmental concerns have caused some to opt-out of reproduction, both to help the planet and to protect their would-be children.