Here’s something worrying. People are worried. A survey taken in December found that increasing numbers of people are pessimistic about the future. 44% said they were fearful about what “the new year holds in store” for them personally, and 56% were fearful for what lies ahead for the world generally. And the pessimism is getting worse. The numbers are the gloomiest this survey has recorded in 11 years.

Regardless of whether you have traded your own rose colored lenses for grey ones, you, and all of us, need to worry about such pessimism, because worry does all sorts of harm, both personally and to society. Personally, worry/pessimism contributes to chronic stress, which is bad for our health in lots of ways. What’s more, the response to stress includes hormonal changes that make you more sensitive to any subsequent threatening signal. So what might not have felt scary in better times now sets off alarms, and what was only a little threatening before now feels like more of a threat. We do have to fear fear itself. Biologically, it becomes a positive feedback loop.

Socially, worry changes our behavior in lots of ways. In the language of cognitive science, worry switches us from a default mode of Optimism Bias – those rose colored lenses that let us believe “It Won’t Happen To Me” or “My marriage/job/health/vacation will turn out better than average” – to Loss Aversion, a default sense when comparing losses and gains, or risks and benefits, that gives the losses and risks more emotional weight than equivalent gains or benefits. When we are worried and Loss Aversion is shaping how the world feels, the glass looks more half empty than half full.

Our spending and investing behaviors change. Our travel and leisure behaviors change. But far ominously than any of those things, worry changes the way we treat each other. As worry and pessimism rise, we more readily adjust our views and values so they align with those in the groups we most closely identify with, and the more emotionally important our affiliation with those groups becomes. That’s adaptive behavior for social animals like us, who have evolved to rely on our group – our tribe – for our own health and safety. So the more worried we feel about “what the new year holds in store,” the more closely and fiercely we hold to the views common to our group and the more closed-minded we become to any view that conflicts with our own, because competing views threaten the tribal/ideological unity that is literally important to our sense of safety and well-being.

(This all happens way below consciousness, and for the most part, beyond our free will. It’s part of the instinctive system of risk perception that our brain uses, mostly behind the scenes, to try and keep us safe.)

The survey, then, is grounds for pessimism about finding common ground and making progress on the huge challenges we face…all of us, regardless of which groups or ideologies we belong to; climate change, the federal fiscal crisis, looming insolvency of social support systems. In fact, the survey offers particularly bleak specifics about the polarized divide American has been spiraling down into for decades.

Look at how optimistic/pessimistic people are, personally, by general ideology;

How do you feel about what the year 2013 holds in store for you personally?

And it gets even more divided among those who identify themselves as a member of a specific political tribe.

Seven out of every ten Republicans are worried about what the future holds for them, personally. That is frightening. But you might think that makes sense since a Democrat is President.  Sadly, the results are not simply a matter of whose tribe is in charge. People’s optimism/pessimism is shaped by larger trends and conditions that impact us all. Since this survey began, during which both parties have held the White House (the surveys are taken at the end of each year), note how, generally, optimism (the blue and green lines) is going down, and pessimism (the purple and red ones) is rising. For all of us. 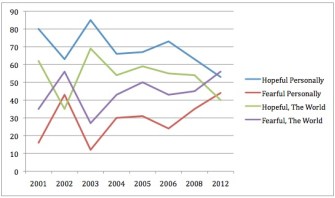 It is hardly news that America has become more divided. But this survey offers fresh support that these divisions are not about gun control or abortion or any of the individual issues we fight about, but about deeper dissatisfactions and worries – about the economy and/or the environment and/or whether society is getting too progressive or conservative – which add up to a growing general pessimism that the future is more threatening than promising.

That is really scary, because they way the human animal responds to such a general sense of being threatened, is to grow even more tribal and divided, more closed minded and unable to cooperate, more and more locked into an ultimately destructive combat that is more about fighting for our own individual tribe than for solutions to the huge overarching problems we all face in a society that, like it or not, we share.

In Malaysia, Everyone’s Free To Call Their God “Allah”

One of the country’s most conservative religious parties sets the record straight after a statement was made on Christmas asking non-Muslims not to use the word.