Editor’s Note: Today, in honor of World Water Day, we’re publishing this guest post from Doc Hendley, the founder of Wine to Water, a nonprofit organization focused on bringing clean water to the nearly one billion people lack access to clean water. The water crisis is one of the largest and yet most under-reported humanitarian crises in the world, says Hendley.

We started digging early that morning. It was July, so we knew it was going to get really hot, really quick— daytime temperatures in Darfur that time of the year can easily reach a hundred and thirty degrees Fahrenheit. Plus, there was much more to do. The digging was only the beginning.

There were at least a dozen of us men working together in a wide- open spot on the western edge of Nyala, just past the outskirts of town. Very little vegetation grew there— the place was all sand and rocks. In fact, many local women collected the smallest of these rocks, arranged them in piles on the roadside according to size, and sold it as gravel. I always made a point of buying my gravel from these women for whatever building projects we had.

We each took turns digging; the first foot or so was mostly loose sand, but that soon gave way to a thick crust. Slowly we chipped away at the hard earth until our hole was approximately three feet deep and about two and a half feet wide and seven feet long. That was when Amir jumped down inside the hole.

He stood at one end, then quickly dragged his left foot lengthwise along the dirt, leaving a dusty path about a foot wide and six feet long. Without a word, an older man handed him the shovel. Amir began digging again, quickly yet carefully, within the outline he had created. All of the men took turns digging the smaller hole.

I was struck by their precision and efficiency. It was as if this digging was instinctual. Once the second hole- within-a-hole was neatly carved out to a depth of three feet, all of the men from Ismael’s family and I then walked over to the open bed of a small, dusty white pickup truck and lifted out Ismael’s limp body. He had been dead just over twelve hours and was wrapped in a white linen shroud customary for Muslim burials. As we gently lowered Ismael’s body down to Amir, who was standing in the hole, thoughts and emotions were storming inside me. I was heartbroken for Ismael’s family.

I was pissed at the Janjaweed for wrecking everything they touched. Most of all, I felt like Ismael’s death was ultimately my fault. I believed he was probably murdered because of his work with me, bringing fresh water to the very people the Janjaweed were mandated to kill.

For the past three weeks, my team had been working extra hard. We rehabbed a dozen old wells, completed chlorine tablet drops to rural villages, and dug hundreds of latrines for Sania Afondu, as well as establishing a new hygiene education program. We had been very busy, and I was proud of my guys, so I gave them a couple days off to rest. Ismael hopped on the bus to spend the weekend in his home village visiting with his wife and three children and bringing them his week’s wages.

On the half- day ride back to Nyala and back to work, Ismael’s bus was stopped just after nightfall about one mile short of the Nyala police checkpoint. Four Janjaweed soldiers blocked the bus, aiming AK-47s at the windshield, while two others pushed open the door and climbed aboard.

One by one the men forced all of the passengers out the door. They lined them all up, men, women, and children, and made them lie facedown in the cold sand. A soldier walked back and forth along the line of frightened travelers, interrogating them about their involvement with the SLA. Then he picked out four men, including Ismael, and loaded the rest of the people back onto the bus.

With all of the passengers watching, the soldiers forced Ismael and the others onto their knees, yanking their hands behind their backs. Then they lowered their rifles and shot each one of them in the back of the head, execution style. It all happened very quickly. Amir gently rolled his friend onto his right side, facing Mecca, and slipped him into the smaller interior hole. Ismael fit perfectly inside. Amir carefully covered the hole with large, fl at, chalky white stones and climbed out. Following Ismael’s father’s lead, we each took turns shoveling dirt atop the stones, slowly refilling the grave.

Everyone wanted to pitch in. I think maybe in a strange way it helped with the healing process of losing a son, father, and friend. Of course, in the Muslim culture, burials are an event that only the men are allowed to attend; the rest of the family would feast together night and day for the next three days in celebration of Ismael’s life.

From that whole event, the one thing that was seared into my memory, the thing I still ponder most during those dark times when I have neither strength nor will to suppress such thoughts, is the image of Amir dragging his foot across the bottom of the grave without hesitation to perfectly fit our friend into his final resting place.

I lived in Darfur from August of 2004 to August of 2005. During that year, the UN estimated that more than a hundred and twenty thousand people were killed as part of the fighting between the SLA and the Janjaweed and, of course, the genocide of the black African population.

Death was all around me during my tenure. Hell, I even came close to dying a few times myself. But it took seeing Amir measure out a man- width hole using the length of his foot for me to realize that, sadly, the Darfuri people had become experts in the matters of death. I think whatever scraps of innocence I had left in my body were buried with Ismael that day in the grave that I helped dig.

Reprinted from Wine To Water by DocHendley by arrangement with Avery Books, a member of Penguin Group (USA) Inc., Copyright © 2012 by DocHendley. 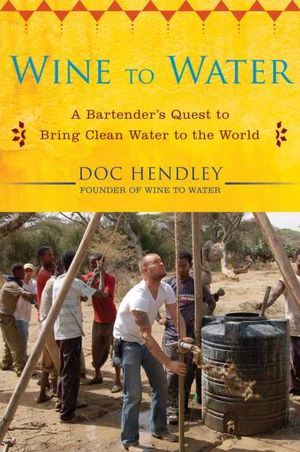 Flexible organic circuits might someday hook right into your head.
Up Next
Surprising Science

Where Are All the Humanoid Robots?

We were promised Jetsons-style helpers but all we have is a big hockey puck that vacuums hardwood floors. Will inventors ever create great humanoid robots? If they do, will we accept them?