This article originally appeared in RealClearScience. Read the original here.

By now, we are all likely aware of the harms posed by eating a lot of sugary foods. One simply cannot lead a life laden with desserts, sodas, and sweets and expect to be healthy.

But what, if, like approximately 13 to 25% of Americans, you maintain a healthy diet but indulge in, say, a donut for breakfast, with a grande Starbucks mocha frappuccino later on, and perhaps a 20-ounce soda in the afternoon? That’s okay right?

Maybe not. In a new study published in Nature Communications, researchers at the University of Utah have found that comparatively modest levels of sugar consumption in mice can increase female mortality and hinder males’ ability to compete.

Beginning at weaning, 156 house mice were fed two different diets. Half were given a diet composed of 25% sugars that was otherwise quite nutritive and healthy. The other mice were fed an identical diet except the sugars were replaced with cornstarch and a very small amount of fiber. After 26 weeks, both sets of mice were divided up equally and placed in six different large enclosures. While in the enclosures, all mice were fed the 25% sugar diet. 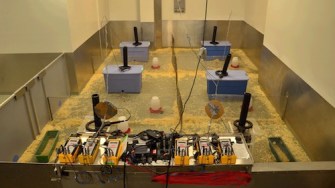 Overall, male mice fed the sugary diet controlled 26% fewer territories and sired 25% fewer offspring. Even worse, females on the sugary diet suffered a death rate twice as high as their counterparts on the normal diet!

“The increased rates of mortality and decreased reproduction observed in this study represent the lowest level of added sugar consumption shown to adversely affect mammalian health,” the researchers say.

Somewhat counter-intuitively, female mice on the sugary diet gave birth to many more offspring than their normal diet counterparts through twenty weeks of the study, possibly because they had higher fat stores, and thus more energy reserves to be used for lactation and gestation. However, after twenty weeks, their reproductive success sharply declined, and their mortality rates skyrocketed. Thus, looking at the entire duration of the study, females on the two diets had similar levels of reproductive success.

What, if anything, can this research tell us about ourselves? It doesn’t appear that there’s much to glean on the physiological level. Differences in key measurements of body mass, plasma glucose, insulin, and triglyceride concentrations between the sugar and control mice groups were insignificant. Cholesterol levels were slightly elevated, however. One possible explanation for this dearth of bodily evidence is that 32-weeks is simply not enough time to show significant physiological changes. For humans habitually consuming a moderately sugary diet, deleterious physiological effects may be more pronounced over time. Still, given the data, the researchers couldn’t pinpoint a precise mechanism for the drop in fitness and elevation in mortality among sugar-fed mice, making the findings difficult to transfer to humans

The researchers compared the sugary mouse diet to that of a human drinking three cans of soda per day whilst eating an otherwise healthy diet. For reference, those three cans of soda are equal to consuming roughly 125 grams of sugar per day, which is about 1.83 20-ounce sodas or 3.3 tall (12-ounce) mocha frappuccinos from Starbucks.

Recent data from the Centers for Disease Control shows that most Americans are not consuming this much sugar. From 2005 to 2010, approximately 13% of the average American diet came from added sugars like high fructose corn syrup and molasses, well below the 25% level that the mice consumed in the study.

Still, the current research — though limited in scope — is a cautionary tale. While the occasional treat or dessert is something to be relished, not feared, Americans should be aware that sugarssubtly creep into their diets through fruit juices, caffeinated beverages, sweetened breakfast foods, and especially sodas. They can, and do, add up.